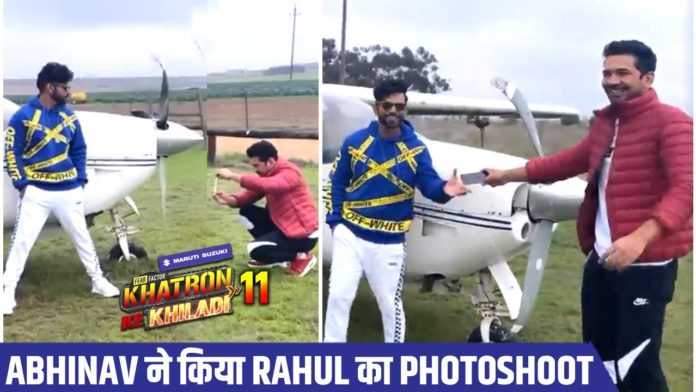 The shooting of the 11th season of Khatron Ke Khiladi is going on at a brisk pace in Cape Town these days. Like every time, this time too, the new contestant will have to play with tremendous dangers. This time Abhinav Shukla and Rahul Vaidya, two enemies of Bigg Boss 14, will also be seen in Khatron Ke Khiladi. It is full of happiness for the fans to see both of them together again in a show. Meanwhile, a shocking video of both of them has surfaced.

All the contestants who went to Cape Town for Khatron Ke Khiladi have a lot of fun there. Different contestants are sharing their stylish photos and videos every day. Now such a video of Rahul Vaidya and Abhinav Shukla is going viral on social media, seeing which the fans have been surprised.

Rahul-Abhinav’s video goes viral.
After ‘Bigg Boss 14’, Abhinav Shukla and Rahul Vaidya will once again be seen together in Khatron Ke Khiladi, so the fans felt that the enmity of both would be seen here again, but now it seems that between these two. Everything is fine, and they have become friends.

Actually, a video of ‘Khatron Ke Khiladi 11’ has surfaced, in which Rahul Vaidya is seen posing near a private jet while Abhinav Shukla himself is seen photographing him. After taking the photo, Abhinav gives the phone to Rahul, laughing, after which Rahul himself is also seen laughing.

Watch video of both here


It is clear from this scene that both have become friends now. Seeing this video, while some fans are happy, some are questioning whether the fight between both of them was fake in Bigg Bos’s house. However, it cannot be clear from this one video that all is well between the two. It will be known only after the show that the two have a mutual relationship in this show.

Just a week before the finale of ‘Bigg Boss 14′, Abhinav had to be evicted based on the housemates’ votes, while Rahul became the first runner-up of the reality show. At the same time, Abhinav has said that Rahul did not deserve the top 2. Abhinav and Rahul’s fight was seen many times in Bigg Boss.