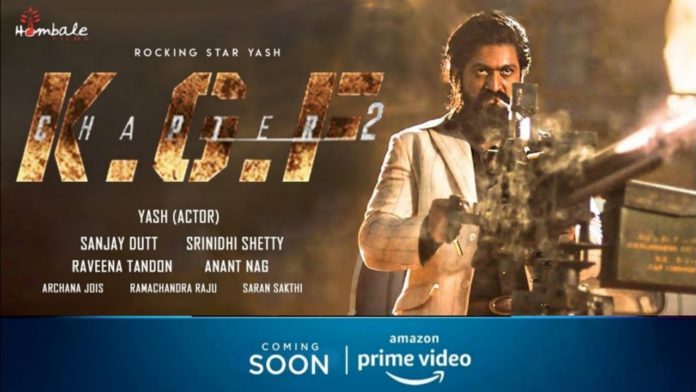 There is a lot of stir in the film circles regarding Kannada superstar Yash’s upcoming film KGF 2. Everyone is eyeing the release of this mega-budget film. Earlier, this film was to reach theaters on July 16 this year. On which the second wave of Corona put the brakes. Since then, the market of speculation about the next release date of the film is hot.

A famous web portal had earlier reported in an exclusive report that the producers of KGF 2 are all set to release the film on a festive occasion. It was learned from the sources that this film might reach the theaters on the occasion of Diwali this year. So far, the producers have not officially announced the next release date of this film. Meanwhile, there is a competition among OTT platforms to grab the rights for the digital release of Yash, Srinidhi Shetty, Sanjay Dutt, and Raveena Tandon starrer film KGF Chapter 2.

It is heard that a streaming platform has offered a huge amount to Yash starrer film KGF. According to the media reports, a big player has given a mega offer of Rs 255 crore to this film for a direct OTT release. If reports are to be believed, the South Superstar has not finalized the deal yet. It is being said that Yash wants his film to be released in theaters first. About which superstar Yash has also conveyed his opinion to the makers of the film. Now it has to be seen what final decision the filmmakers take regarding this.

Meanwhile, superstar Yash is in a discussion about his second film. There are reports that he will be seen in Yash director Nathan’s next film after KGF 2. In this film, his character is being told as a Navy officer. In which actress Tamannaah Bhatia can be seen in the opposite lead role of the actor. Earlier, Yash and Tamannaah Bhatia had seen a dancing video in the film KGF Chapter One.