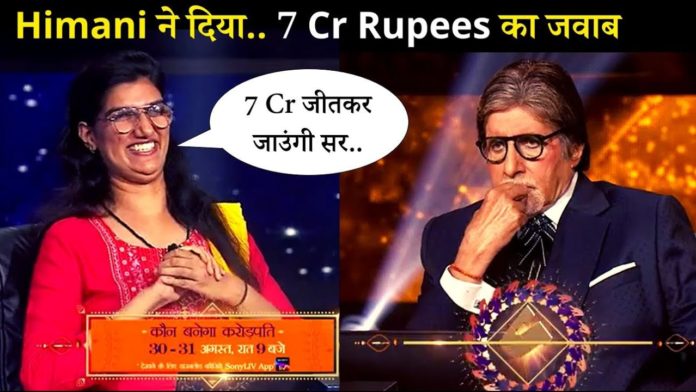 Everyone likes to watch the show Kaun Banega Crorepati, which is aired on Sony TV. Kaun Banega Crorepati 13 season has started on TV from 24th August. At the same time, Himani Bundela, the teacher of Tajnagri, has proved her courage and knowledge in KBC-13. Himani has become the first millionaire of this season. The episode of Himani Bundela becoming Crorepati was telecast on 30 August on Sony TV. Himani and her family are pleased about this. Whereas today Himani has made one crore in his name without any lifeline performing a brilliant game. However, Himani’s dream of winning seven crores remained unfulfilled.

The host of the show Amitabh Bachchan asked Himani for seven crores what was the title of the thesis presented by Dr. B R Ambedkar at the London School of Economics for which he was awarded a doctorate in 1923?

The correct answer to this question was ‘The Problem of Rupi.’

Himani, who became the first winner of the show, is a lively and very cool person. Himani Bundela, a resident of Guru Gobind Nagar, Agra, is a teacher by profession. Along with teaching children, she also runs an awareness program for differently-abled children in her school. Himani cannot see, but despite this, she wants to start many programs across the country to give light to the lives of children. But Himani, who always spread light with her words and smile, was not already blind, but an accident took away her eyesight. Let’s know what happened to Himani, due to which she lost her eyesight.

Himani Bundela had an accident at the age of 15, due to which she lost her eyesight. It was natural for Himani to break down after this accident. But his family did not leave his side. Especially his father and elder sister supported and encouraged him every step of the way.

Himani was smart in studies since childhood, and growing up; she wanted to become a doctor. But after losing his eyesight in this accident, his dream was broken. However, the family had always helped him to study and grow. After graduating, Himani decided to do B.Ed. After the end of her studies, Himani Bundela was selected in Kendriya Vidyalaya, and she started teaching in the school. Along with the education of the children, they run different programs to make them aware.

Earlier in season 12, four people became millionaires, and all four were women. A similar beginning can be seen in season 13 as well. Himani Bundela, the first crorepati of season 13, has become a millionaire by giving the correct answer to the question of Rs 1 crore. It happened in the year 2000 on Star Plus. The reality quiz show recently completed 21 years of its journey.