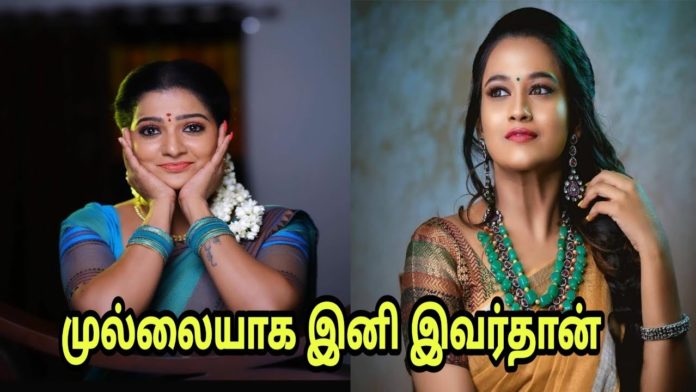 All Pandian Stores fans are currently in dire straits. The reason is that VJ Chitra, who was playing the role of Mullai, committed suicide. The confusion as to why she made such a decision aside, the question of who will play the next Mullai remained unanswered. Now the makers of the show have confirmed the actress who will be replacing VJ Chitra as Mullai.

The Pandian Stores serial has a huge fan base. Women, homemakers, and men are enjoying this series a lot. It is no wonder that the Pandian Stores serial, based on such a story, is gaining so much popularity in this age where there is no collective family culture. Young people watch this serial so much because of the romance that comes in the series. Thus, VJ Chitra, who played the role of Mullai, got a lot of fans.


Some fans regularly watch the serial for Mullai. Chitra got more fans with this role. On December 9, Chitra committed suicide by hanging herself in her hotel room. Police have arrested her husband Hemanth after it was revealed at the inquest that it was her husband Hemanth, who was responsible for this outrageous decision.

The Pandian Stores serial team has also expressed their heartfelt condolences for Chitra’s death. Many of the actors in the series have been talking very eloquently about Chitra on social media. Fans are increasingly asking the question of who will be playing the role of Mulla in Pandian Stores. But the serial team has not yet released any official announcement.

It has been reported that actress Saranya Duradi will be playing the role of Mullai next. But she denied it as a rumor. “In response to Chitra, I saw the news spreading that I was going to play the role of Pandian Stores umbilical cord. That is not true. I did not believe in replacing him. Chitra got recognition for her outstanding performance. I think so, “Saranya explained.

Kaavya Arivumani is the next Mullai


According to the latest information circulating, actress Kaavya, who plays a pivotal role in the Bharathi Kannamma serial, is all set to play the next role. Hema Rajkumar, who plays the lead role in the Pandian Stores serial, has shared this information on Instagram.

The show’s makers have officially confirmed this news, and the new Mullai episodes will be aired from 23rd December 2020. VJ Chitra’s as Mullai was unforgettable, and we will have to wait and watch Kaavya’s performance in this new role.