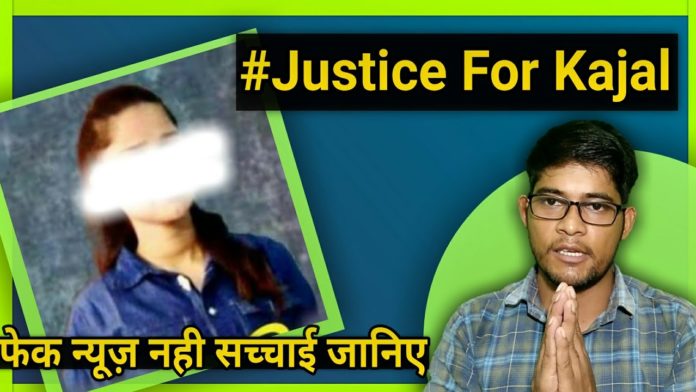 A girl student was shot dead by miscreants in Uttar Pradesh’s Gorakhpur district on the night of August 21 because she had made a video of her father’s beating by the miscreants. Five days after the incident, the girl student died in Lucknow’s KGMC. At the same time, even after more than eight days have passed, the hands of the police are empty. The police have announced a reward of twenty-five-twenty-five thousand for the arrest of the killers.

According to reports, this whole matter is of Jagdishpur Bhaluwan village of Gagaha area of ​​Gorakhpur. Rajeev Nayan Singh allegedly had a dispute with vicious criminal Vijay Prajapati of his own village over money transactions. Vijay Prajapati entered Rajiv Nayan Singh’s house at around 11.30 pm on 21st August and started beating him. Seeing the assault, the sixteen-year-old daughter Kajal Singh came out of the house and started making videos on her mobile after seeing her father beaten up. This made Vijay more furious, and he had hit Kajal in the stomach, snatched her mobile, and fled along with her companions.

Kajal was admitted to Gorakhpur’s Medical College for treatment, but doctors referred her to KGMC Lucknow when seeing her condition becoming critical. Even six days after the incident, the bullet could not be removed from Kajal’s stomach. He died on the morning of Wednesday, 25 August. At the same time, there is a demand for the arrest of Kajal’s killers on social media. With the hashtag “Justice for Kajal” on Twitter, many users are demanding strict punishment for the killers.

A Twitter user named Rathore sahib writes, “Where did those leaders die who used to say that there is a government of Thakurs in UP…?? We want justice for our sister Kajal Singh….”

Ajit Singh writes, “Even on such a serious incident, all the big leaders of Uttar Pradesh have kept silence; if there were a daughter of some other society here, by now, everyone would have come and wept from the mad media.”

Even on such a grave incident, all the senior leaders of Uttar Pradesh have kept silence, if there was a daughter of any other society here, then by now everyone from the double media would come and cry.#JusticeForKajal #काजल_हत्याकांड_के_आरोपी_को_गोली_मारो@Uppolice pic.twitter.com/IiFZ1pJ7GQ

A user named Jalam Singh Champawat writes, “Save the girl child, only the slogan remains, only to do politics….”

Rishu Singh’s Twitter handle wrote, “The life of a commoner in India seems so useless that people have the audacity to take the law into their own hands, beat up others, and kill a small child without fear of consequences. How is this? Is there order?”

Life of common person in India seems so worthless that people have the audacity to take law in their own hands, beat the shit out of others and kill a small child without any fear of consequences.
What kind of a system is this?!#Shame#JusticeForKajalsingh #JusticeForKajal

Saurabh Pratap Singh writes, “When will our daughter, sister, and mother feel that they are safe. This is not a political issue; I must say that all political parties of party line should come forward and support so that we get justice at the earliest.” So to receive.”

When our daughter, sister and mother's will feel they are safe.
It's not a any political issue, I must say all political parties across the party line come forward and support, so that we get a justice ASAP.#JusticeForKajal

A user named Ansh Base writes, “Why do the government and administration look at the caste of the victim even in providing justice to the victim?”

Why does the government and administration see the victim's caste even in giving justice to a victim ?? .. ??#JusticeForKajal #काजल_हत्याकांड_के_आरोपी_को_गोली_मारो