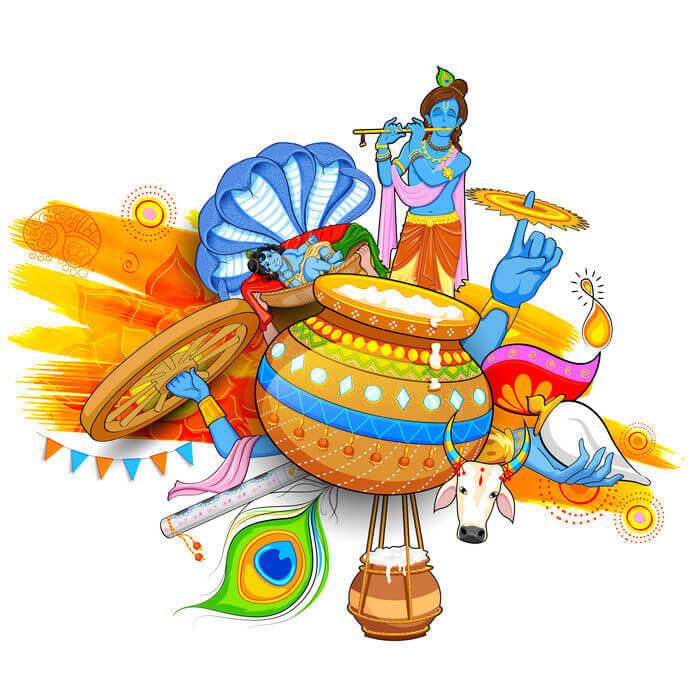 Ashtami of Bhadra Krishna Paksha is celebrated as Krishna Janma Utsav. This time Janmashtami 2019 will be celebrated on 23 and 24 August 2019. If the traditional hard worship with intense fasting is difficult, then you can follow these 7 simplest things.

Krishna Janmashtami is celebrated not only in India but all over the world with great love and traditional methods. This is the main religious festival of Hindus. The Ved Purana shows that Lord Krishna (Lord Krisna) was the eighth incarnation of Lord Vishnu, the follower of the universe. Shri Krishna was born at twelve o’clock on the night of Ashtami Tithi of Bhadrapada Krishnapaksha, so the birth of Shri Krishna is celebrated with great pomp in all the temples and homes of the country.

Why is Janmashtami on 23 August

First of all, in the context of the greatness of Shri Krishna, tell us that if you worship any deity among the Hindu deities, then you worship Lord Krishna. Now let’s talk about the greatness of Shri Krishna’s birth anniversary. The festival of Janmashtami is celebrated in great pomp and traditional way not only in India but in Krishna temples of all the countries of the world. On this night, the shade of the temple is seen. It is believed that on this day, Lord Vishnu was born as Shri Krishna from the womb of Mother Devaki. Shri Krishna was born primarily to kill his maternal uncle Kansa and his fellow Asuras and to free the public from his torture. On this day, everyone, from children to elderly and women, keep fast for the whole day in the joy of the birth of their dear and beloved Shri Krishna. Some worshipers of Shri Krishna also keep waterless on this day. While the tableau of Shri Krishna’s birth is decorated in the houses, bhajan-kirtan run in the temples. When Shri Krishna is born at twelve o’clock, he celebrates his birthday by swinging. The women sing the motherhood of the mother-child. On this day, the beauty of the Krishna temple of Mathura is seen. Apart from the whole of Mathura, the tableaux of Shri Krishna are decorated in many other cities. This festival is mainly celebrated at every police stations around the country, according to the Vedas and Puranas, Shri Krishna was born in jail. Also read: Krishna Janmashtami 2019: Sri Krishna’s birth anniversary will be celebrated on this day, know Janmashtami worship method, auspicious time and mantra

How to keep fast

To keep the fast of Sri Krishna’s birthday, one should eat only one day before a day. After this, wake up before sunrise in the morning and after bathing and meditating, after fasting, one should start fasting. After making a full day of foliage, at night, after the puja-aarti on the birth anniversary of Shri Krishna, the bhog offered to the Lord is accepted as Prasad. Some people take food only after this, but since Shri Krishna was born at midnight, most people wake up early in the morning and break the fast on the next day, after getting up from the bath.

Shri Krishna is born after 12 in the night. First they are bathed with milk, then curd, ghee, and honey. After this, Ganga water is anointed. This becomes Panchamrit and is distributed among the devotees as Prasad. After this, new clothes are worn to Bal Gopal. It is said that in many places, the Mangal song is sung while Shri Krishna was born. Krishnaji is made to sit on a pedestal made of flowers and make up. Peacock on the head. Then wear a crown. Keep the flute with their favorite item near them. After this, wear a stiff, necked necklace in their hands. Put sandalwood on their forehead and worship it with incense and lamps. At this time, some places are offered with butter, sometimes with sugar or sweet. Keep basil leaf in the enjoyment. It is believed that the basil leaf is very dear to Shri Krishna. After this, the tradition of swinging Krishna on the jhoola is played.