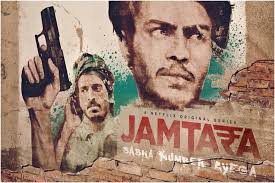 Current day scenario calls for a nexus between the holy trinity; politics, police and press to be observed under a scanner, Netflix’s latest released series Jamtara delves into calling a spade and spade. In India we are aware of crimes that don’t come under the radar of the law. Over the span of two years raging from 2015 to 2017, it is reported that police from over twenty three Indian states took a trip to the Jharkhand district of Jamtara which is a six hour road trip from Ranchi. From one of the most underdeveloped districts arose the technique of ‘phishing’, a scam through which individuals pose as reputable companies in order to extract personal information such as passwords and credit card details from unsuspecting victims. It had become a household business in the poverty stricken area where those involved were rolling in money near their old shanties.

Thread these words and it makes a very fascinating story but Jamtara isn’t about statistics or trends it revolves around people. The thing about shows are that the audience like to invest in its characters but here we aren’t given a chance to be emotionally invested. We scan through the characters and the episodes comes to an end. The conmen, cops and politicians are loosely crafted. They are used as a medium to push the plot forward but not what the audience would usually be invested in.

Circa 2015, Jamtara follows the journey of two ambitious cousins Sunny Mondal (Sparsh Shrivastava) and Rocky (Anshumaan Pushkar). Successful con artists whose worldviews differ from one another. Sunny wished to marry the local English teacher Gudiya Singh ( Monika Panwar) while Rocky wants to expand his operation by joining hands with the local politician Brajesh Bhan (Amit Sial). Swindling money with uttermost smoothness, it comes to Brajesh’s notice that the boys are earning more than they put out. He makes them an exceptional offer but Sunny does not want to dip his toes too deep. This causes a rift between the two cousins.

Sunny’s weariness proves to be right. The growing popularity of cyber-crime has put Jamtara under the spotlight. The district is shaken by the coming of a fresh IAS officer Dolly Sahu (Aksha Pardasany) who is driven by her honor and anti-corruption. On the other hand Mahesh (Ravi Bhushan Bhartiya) the local editor is backing up a young journalist Anas (Aasif Khan) to use his affiliations to pen down an expose on the phishing syndicate.
The focus of the story is the relation between the two characters and not its foundation of crime. As the narrative progresses the character arcs of Sunny and Rocky occurs a dynamic transformation. There is a flint of friction that grows over time to them being at cut throat competition with another. Other than these two characters, Gudiya is another round character portrayal. She sets off with aloofness towards Sunny’s business but ends up embracing its flaws and compromising on her values. Dolly does not enjoy much screen time and her character isn’t explored as much as it should have been.

Why is Jamtara-Sabka Number Ayega Not Fascinating?

The problem with begins when it becomes repetitive through its dialogues. This slows down the pace of narration and makes it feel dragged across ten episodes which span for over just thirty minutes, adding to it always being in staccato. We are unable to attain any new information about the characters. There is a connectivity issue so what came before is not built up on later across the narrative. To add to the ‘Indianness’ factor, there is a song and dance interlude which holds no place and isn’t a necessity.

Jamtara loses the plot and we do not feel the essence of the uneducated and backward small town people. If the audience is unable to find a connection with the characters then there is no emotional bonding that makes it worth the watch. The rapid pace of storytelling and its loose ends left untied shows neglect not only of India’s negligent population but also the plot-line.