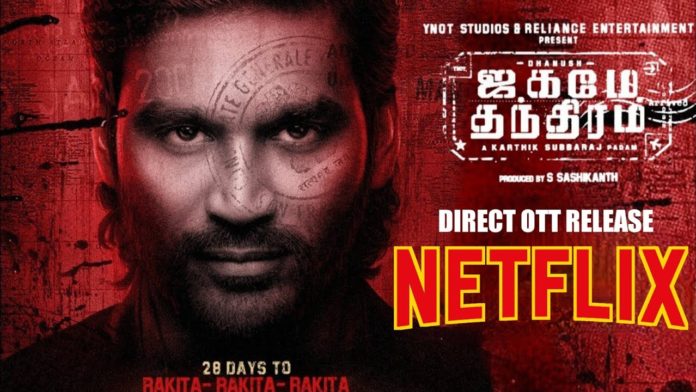 Dhanush starrer ‘Jagame Thandhiram’ has confirmed a direct OTT release. ‘Jagame Thandhiram’ is a film directed by Karthik Subbaraj and starring Dhanush, Hollywood actor James Cosmo, Aishwarya Lakshmi, Lal Jose, Kalaiyarasan, and Rasukutty, among others. Composed by Santosh Narayanan and cinematography by Shreyas Krishna. Produced by Y Not Studios and co-produced by Reliance.

At one point, the Netflix OTT platform offered to pay a large sum for a direct OTT release. But, due to the film industry’s persuasion and Dhanush’s displeasure, it was decided that it would be a theatrical release. At that time, there was a conflict of opinion with the theatre owners during the release talks of another film, ‘Aelay’ by Y Not Studios.

Following this, Y Not Studios gave the surprise of ‘Aelay’ direct release on Vijay TV. Besides, Netflix, which had earlier offered a large sum of money, is now officially accepted and confirmed the direct OTT release of ‘Jagame Thandhiram.’ Thus ‘Jagame Thandhiram’ will not be releasing in theaters.