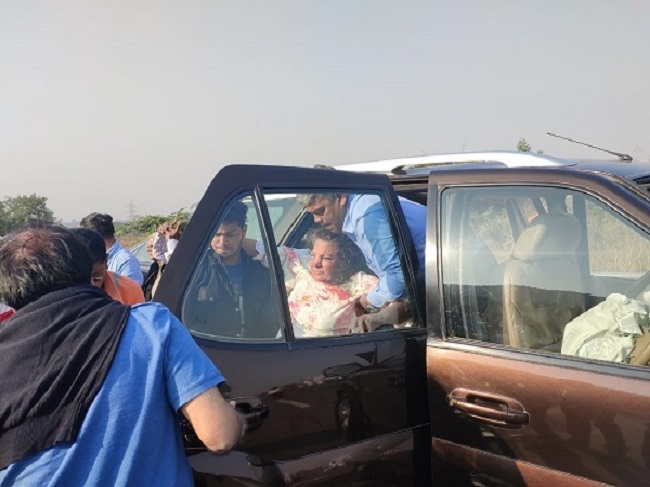 Film actress Shabana Azmi’s car has crashed on the Mumbai Pune Expressway. According to media reports, the actress’s car collided with a truck near the Khalapur Toll Nakha, in which she suffered serious injuries. Have been admitted to the nearest MGM Hospital.

In the pictures that surfaced after the accident, she can also be seen unloading from the car. However, Shabana Azmi, who was sitting at the back, also had a seat belt. Due to this, she has suffered less injuries. The accident of Shabana Azmi’s car is from a truck. The car hit the truck from behind.

Many photos of Shabana Azmi and the accident spot have also been revealed on social media. In it, her damaged car can be seen. According to the Raigad police, ‘Shabana Azmi and her driver were injured in a car accident. The incident happened on Mumbai-Pune Express Way Khalapur is near toll. She was coming back from Pune to Mumbai and her car collided with a truck. Javed Akhtar was also in the vehicle but he is safe. Both have been admitted to MGM Hospital.

Raigad Police: Actor Shabana Azmi&her driver got injured in accident near Kahalpur on Mumbai-Pune Expressway. Javed Akhtar was also present in the car, but he is safe. Their vehicle was hit by a truck while they were travelling from Pune to Mumbai. Injured shifted to MGM Hospital https://t.co/bezuNWvUTa pic.twitter.com/8YWtZoEUSF

Shabana Azmi is a Bollywood actress and she has worked in many films. Apart from this, she also speaks on many topics.

Meanwhile celebrities have requested not to share the horrific photos of the accident. We from TheNewsCrunch pray for her speedy recovery.