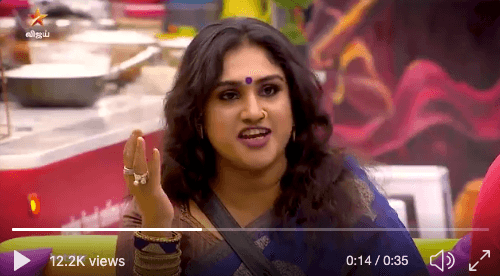 Bigg Boss Season 3 is riddled with controversies and Vanitha being the centre of everything. She is speaking her mind out and sometimes crossing her line which many agree like in the case of Sherin and Tharsha where she called their relationship an affair. It triggered Sherin which resulted in their relationship spoiled, but this was not Vanitha’s fault alone. There are others in the house that gives input to Vanitha but keeps quiet in a situation while Vanitha easily looses her coolness and shouts at them.


Kamal Hassan in today’s episode September 8 again targets Vanitha. Kamal Hassan was saying something while Vanitha interrupts, Kamal said he will forget if interrupted and Vanitha said sorry. Then Kamal couldn’t continue his talk as he forgot what he was saying and everyone was laughing about that. Yesterday’s episode filled with Kamal making fun of Vanitha and Vanitha couldn’t talk back owning to her respect for Kamal Hassan.

Is Kamal Hassan unfair with Vanitha and Supports Kavin, Losliya and Sandy

Sandy was making fun of Vanitha by giving voice over and he took it to extreme level. But Kamal Hassan didn’t talk about it in yesterday’s episode. It was offensive to some extent from Sandy and Kamal didn’t bring it up while talking to Vanitha.

Also when it comes to Kavin and Losliya his approach is usually softer compared to Vanitha. He acknowledges their love but that doesn’t mean Kavin can sit and not play. Kamal being the host should be hard on Kavin for not playing the game while Vanitha is putting forth that issue Kamal is not taking it into account is what the accusation is from social media.

It’s widely said that Cheran will get eliminated today in Bigg Boss episode and may enter the secret room. We’re not officially confirming it, let’s wait for tonight’s episode.