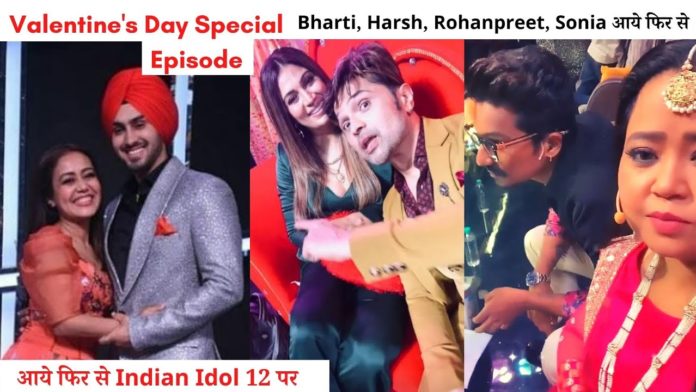 The upcoming episode of Sony TV’s reality singing show ‘Indian Idol 12’ will be exciting. They have decided to do a full episode of Indian Idol in the name of Pyaar. In this special episode, Rohanpreet Singh, Shweta Aggarwal, Sonia Kapoor, Bharti, and Harsh will come as guests. In this episode filled with love, contestants will be seen singing romantic songs.

In this episode, Contestant Mulgi Sayali and Ashish Kulkarni sang songs like ‘Jaana Suno Hum Tum Par Marte Hai,’ ‘Pehla Pehla Pyar Hai ‘Jab Koi Baat Badge Jaaye.’ After listening to this song all the couples also came on stage. Everyone did a tremendous dance on ‘When things go wrong.’

Bharti gets emotional while dancing with her husband Harsh and says, “I am lucky that I get Harsh as a husband since he has been my great support ever since we met.” At the same time, Neha Kakkar became emotional after her romantic dance and said, “Rohanpreet came to be the most special person in my life. I don’t want to be without Rohan; I want him to be with me forever.”

At the same time, in the last episode, Rohanpreet, Shweta Aggarwal, Sonia Kapoor as well as Harsh and Bharti had a fight to eat Medu Vada. In this, the Medu Vada was hung at a height and the husband had to lift his wife in the lap so that they could eat the Medu Vada.

Recently Himesh Reshammiya shared a video with wife Sonia Kapoor in which the actress looks very beautiful in a bottle green color outfit. Neha Kakkar appeared in an orange pretend dress in this special episode. The three judges of the show along with guest, contestants, Himesh Reshammiya, Vishal Dadlani and Neha Kakkar had a great fun.