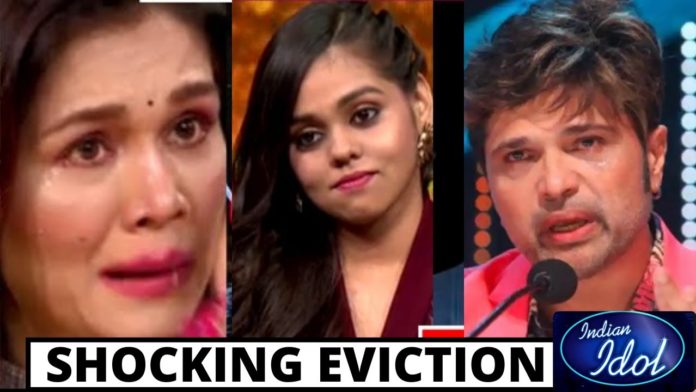 The finale of the singing reality show Indian Idol 12 is on the 15th of this month, and at present, there are a total of 6 singers left in the show. One of the singers will be eliminated in the semi-final episode before the finale. Renowned filmmaker Karan Johar will come as a special guest in this episode. Earlier, there were reports that Sayli Kamble’s would be eliminated from the show. However, according to the news being received, Sayli Kaamble is not out of the show, and she has managed to make it to the top 5.

Now you must be wondering which singer is out of the season again? We are telling you that Shanmukhapriya has been evicted from the season. The proof of this is a picture going viral on social media. The makers want to make the finale grand and are preparing fiercely for this special episode. The makers have decided that they will shoot several parts of the finale episode in advance.

In this episode, the shooting of the finale episode continues unabated. A photo from this shoot is becoming viral on social media, in which Sayali Kamble, Arunita, Pawandeep, Nihal and Danish are seen. Here is the photo:

Many well-known people, including Sawai Bhatt, Ashish Kulkarni, Indian Idol 5 winner Shriram Chandra, famous folk singer Mame Khan are seen in these five. Shanmukhapriya is not visible in this photo. From here, the news has come that Shanmukhpriya has been eliminated from the show. If Sayli were eliminated, she would not have been seen in this photo.

In the comment of this photo, everyone is talking about Shanmukhapriya being eliminated. However, no official announcement has been made by the makers about this. What is the truth now? You will know that only on Sunday. By the way, what do you think about this elimination of Shanmukhapriya? Share your views in the comment section.