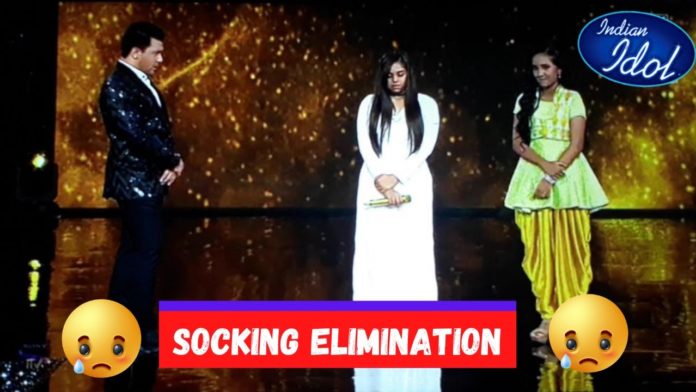 The country’s popular music reality show Indian Idol 12 has got its top 8 contestants. Anjali Gaikwad was out of the show on Sunday. Anjali, who has worked with stalwarts like AR Rahman, probably did not like the audience’s singing; that is why she had to leave the show. However, Anjali always received a lot of praise for her performance from the judges of the show and the stalwarts who visited the show. But still, Anjali could not work her magic on the audience, and she got eliminated.

Since for Anjali, it was said many times that she sings like a playback singer. In such a situation, when Anjali, who got so many compliments, came out, her fans found it very bad. Anjali’s fans started trolling the show’s contestants Shanmukhpriya and Danish Khan, terming her shocking elimination as wrong.

Troll demanded to bring back Shanmukha Priya and Anjali
Although Shanmukha Priya has been trolled for loud singing before, she is getting trolled for two reasons. One is why she was not eliminated in Anjali, and secondly, she sang the song ‘Chura Liya Hai’ filmed on Zeenat Aman, giving her touch. Asha Bhosle sang this song, and her fans did not like this song sung by Shanmukhpriya.

Along with trolling Shanmukha Priya, Twitter users also took on Danish Khan, and his singing and overacting were criticized a lot. Trolling Shanmukhpriya, a user said that when Shanmukhpriya’s song comes, I mute my TV. Sorry, I can’t see the old pure tunes getting ruined. Seriously you think whether Shanmukhpriya deserves more than Anjali. Please, Sony channel, bring them back.

I stopped watching reality shows when i got to know that they all are farzi shows. #ShanmukhaPriya is still screaming there and all the singers who were way more talented than her or anybody got eliminated. Sigh!! #IndianIdol2021

Indian idol 2021 has decided to continue the torture hence #ShanmukhaPriya still there and #AnjaliGaikWad is out.

#ShanmukhaPriya ,her recent performance on 'chura Lia song' is Rubbish,she has ruined the original song,I don't know why #IndianIdol2021 promote this and also the judges who appreciate her only for getting money . They eliminated best classical singer #AnjaliGaikWad also,why…

Can't understand how did a fine singer like #AnjaliGaikWad get eliminated from #IndianIdol2021. She's the only one who retains the melody of golden songs and doesn't turn them to trash unlike #Danish or #ShanmukhaPriya.@SonyTV why torture loyal audience? We want real talent plz.

Similarly, Danish Khan was also trolled
Shanmukha Priya is famous for her yodeling. Those who have an understanding of yodeling may not understand it as shouting. The performances of Shanmukhpriya and Danish are appreciated every week, but the praise given by the judges is being seen as a bias by the audience.