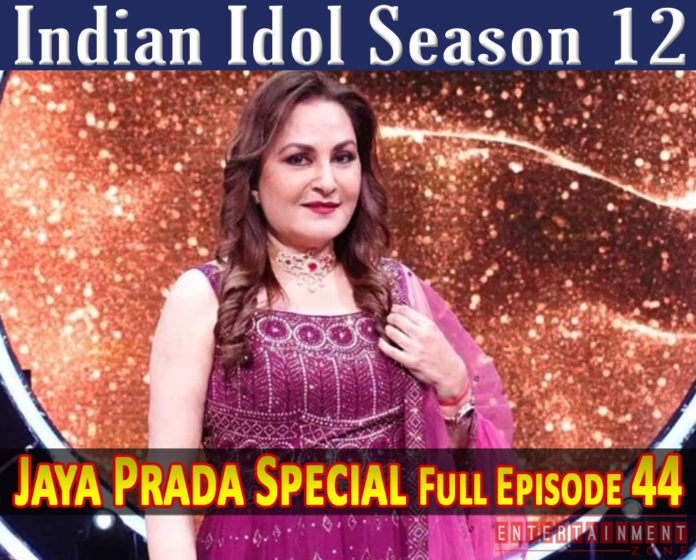 India’s blockbuster singing reality show, Indian Idol 12 is back this weekend with a sizzling episode with Jaya Pradha special. This will be followed by melodious performances of Jaya Pradha’s songs by the top 9 contestants. However, the suspense around the elimination takes the spotlight on Sunday. Also, Sawai Bhatt’s exit is creating ripples in social media.

A vibrant set of judges panel including Himesh Reshammiya, Jaya Pradha, and Vishal Dadlani will witness yet another weekend filled with eye-grabbing performances. However, six talented singers were eliminated from Indian Idol 12 so far. The quest for the seventh elimination continues to mind-boggle the audience. Hence, this week’s performances will be critical for the top 9 Idols of this season.

The episode on Sunday (25th of April 2021) for Indian Idol 12 will feature a special rendition on the account of living legend Jaya Pradha’s presence. The Indian Idol contestants will attempt to sing melodious tributes to the legendary actor. Shanmukha Priya’s impeccable singing continues this week. Shanmukha Priya impressed the judges and audience with ‘Yaaron Mein Zaraa Sambhalna’.

Pawandeep, Ashish, Shanmukha Priya, and Arunita are safe from eliminations this week. However, Sawai Bhatt made a stunning confession expressing his desire to leave the show. Sawai explained his personal issues and the worrisome health condition of his mother which triggered him to this decision.

Nachiket Lele was the last contestant to get evicted from Indian Idol 12. The competition stiffens as yet another elimination suspense looms today’s episode. Hence, the limelight shifts on Sawai Bhatt and Anjali for elimination this week. Though the two singers are highly blessed and have gained amazing applause from the audience, one of their journeys will come to an end this weekend. Sawai Bhatt is a classical superstar of this season but the surging competition might edge him out to elimination this weekend.