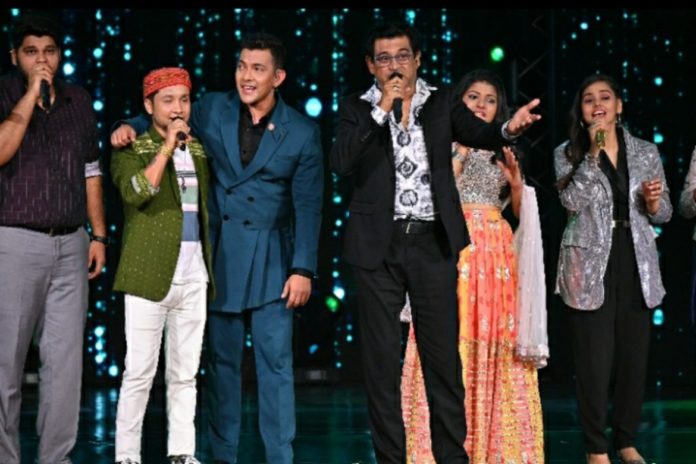 Sony TV’s sensational singing reality show, Indian Idol 12 returns this weekend with some blissful songs from legendary singer Kishore Kumar’s collection. The episodes are titled ‘100 Songs of Kishore Kumar’ and Amit Kumar Ganguly is the special guest for the week. Nine blessed Idols of the show will perform with a special song from Kishore Kumar’s work. However, elimination suspense looms large as the show approaches the seventh elimination in Indian Idol 12.

The judges’ panel will comprise of the blessed singer Anu Malik, Himesh Reshmaiyaa, and Neha Kakkar. The special guest Amit Kumar Ganguly is wooed by the soulful performances of Kishore Kumar’s songs. However, six talented Indian Idols from season 12 were eliminated so far. The suspense of the seventh elimination continues to trigger the fans of the show for the last couple of weeks. Hence, this week’s performances will be critical for the top 9 Idols.

The episode on Saturday (8th of May 2021) for Indian Idol 12 will feature a special appearance by Amit Kumar Ganguly. The musical legend Kishore Kumar’s songs take the limelight in this weekend’s episode. However, there were interesting performances in the episodes featured this weekend.

The amazing song from ‘Jhum Jhum’ was amazingly performed by Shanmuka Priya who is cementing her way into the Indian Idol 12 finals. However, the competition continues to build after the absence of elimination for four weeks.

Idol Danish’s amazing performance in this week’s Indian Idol 12 episode continues to woo the special guests, judges, and audience. The crackling voice gave a special rendition to the song, ‘Saara Zamana’ which got Amit Kumar impressed. Danish is also one of the stronger contenders to enter the finals of Indian Idol 12.

Idol Nihal received accolades for his performance this week. Popular composer Amit Kumar Ganguly gave a special performance of Kishore Kumar’s song after his performance as a token of appreciation. Nihal and Danish proved their prowess in a crucial week in Indian Idol 12.

The competing nine Idols will perform this week on the Indian Idol 12 stage. However, it will be the last performance for one of the singers. Six singers were eliminated so far from Indian Idol 12. The suspense behind the seventh elimination is lurking in the minds of the audience for the last four weeks.