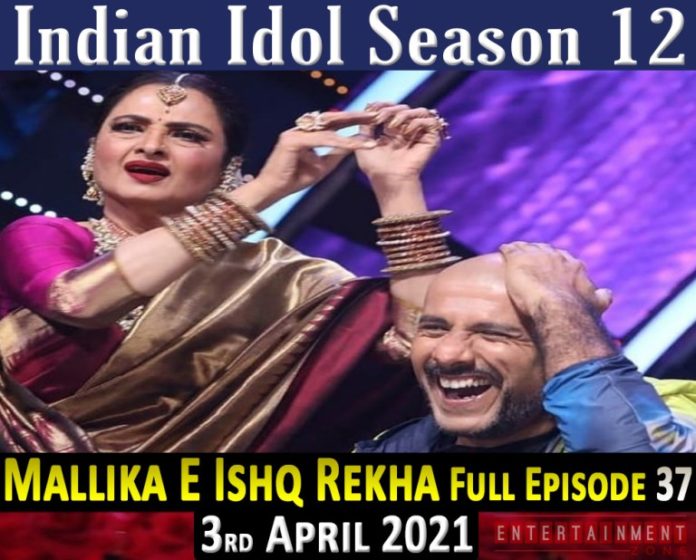 India’s biggest singing reality show, Indian Idol 12 is back this weekend with an entertaining episode with special guest Rekha. This will be followed by amazing performances by the top 9 contestants. The veteran actor will grace the performances during Saturday’s episode.

A vibrant and encouraging judges panel including Himesh Reshammiya, Neha Kakkar, and Vishal Dadlani will witness yet another weekend filled with eye-grabbing performances. However, six talented singers were eliminated so far. The quest for the seventh elimination continues to intrigue the audience. Hence, this week’s performances will be decisive for the top 9 Idols.

The episode on Saturday (3rd of April 2021) for Indian Idol 12 will feature a special appearance by Rekha. The veteran actor is promoting ‘Mallika E Ishq’ in this weekend’s episode. However, Rekha delighted the audience and her fans with an amazing performance for the song ‘Humma Humma’ wearing sneakers with Shanmukha Priya.

Apart from Sayli’s performance, Arunita was among the best performers for this weekend in Idol 12. Arunita gracefully sang the song, ‘Teri Aankhon Ke’ which brought tears to Rekha’s eyes. The special guest also awarded her a shawl for her performance. Arunita’s blissful singing comes at the right time considering eliminations this weekend.

Nine contestants will perform on the Indian Idol 12 stage as they fight to continue their journey. Six eliminations took place so far and the quest for reaching the top 9 intensifies this weekend. However, the suspense beckons on the seventh elimination of Indian Idol 12.

Last weekend, Nachiket Lele was the last contestant to be eliminated. However, the suspense around the next elimination of Indian Idol 12 will be revealed this week on Sunday. Sahil Solanki, Vaishnav, Sireesha, Anushka Banerjee, and Samyak Prasanna were the other eliminations so far. According to reports, one male contestant will be eliminated this weekend.