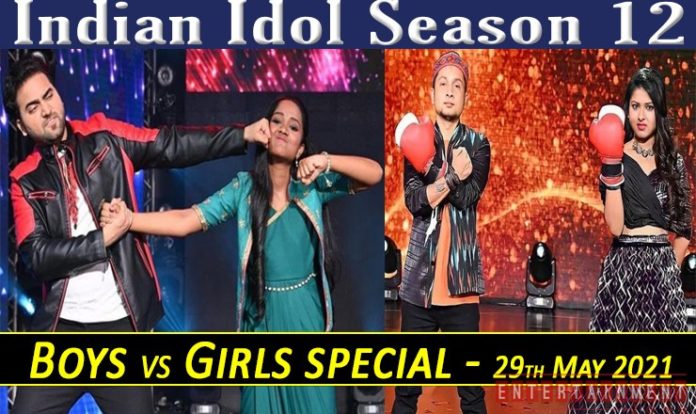 Sony TV’s sensational musical reality show, Indian Idol 12, is back this weekend with some rivetting performances from the ‘Boys vs. Girls’ episode. The special guest for this weekend, Manoj Muntashir, will witness a unique musical battle between the top 9 idols. Nine singers will compete in two groups, Boys vs. Girls, for supremacy this weekend. However, the elimination suspense grips the audience as the seventh elimination of Indian Idol 12 is expected this week.

The judges’ panel featuring Anu Malik, Himesh Reshmaiyaa, and Neha Kakkar will witness some of the sensational performances of this edition. An intense one-on-one battle is on the cards. However, Indian Idol 12 judges eliminated six talented Indian Idols from season 12 so far. The suspense of the seventh elimination continues to trigger the show’s fans for the last six weeks. Hence, this week’s performances will be crucial for the top 9 Idols.

The episode on Saturday (29th of May 2021) for Indian Idol 12 will feature a special appearance by Manoj Muntashir. The top 9 Idols will perform special songs in an epic battle which will take the limelight in this weekend’s episode. However, there were competitive duo performances in the episodes featured this weekend.

The amazing song ‘Lagan Lagan’ won the audience’s hearts and judged Anu Malik, which Danish performed as the singer is cementing his way into the Indian Idol 12 finals. However, the competition continues to build after the absence of elimination for eight weeks.

Idol Arunita performed one of the best songs, ‘Aisa Lagta Hai,’ in this week’s Indian Idol 12 episode continues to woo the special guests, judges, and audience. The potential finalist chalked out a special performance and the special guests of the finest performances in the ten seasons of Indian Idol. However, will her performance be good enough to enter the top 5? Sawai Bhatt cracks up a classical mix to compete with Arunita.

Idol Arunita competed with Danish in the first battle. She sang the melody ‘Laaga Chunari Mein Dhaag,’ which was a strong contender for the best performances. However, was her performance good enough to defeat Danish?

The currently active nine Idols will perform this week on the Indian Idol 12 stage. However, it will be the last performance for one of the singers. Six singers were eliminated so far from Indian Idol 12. The suspense behind the seventh elimination is lurking in the audience’s minds for the last six weeks.

The fight to enter the top 8 of Indian Idol 12 will reach an epic showdown this week. Nachiket Lele was the last contestant to be eliminated. Sahil Solanki, Vaishnav, Sireesha, Anushka Banerjee, and Samyak Prasanna were the other eliminations. According to reports, one male contestant will be eliminated this weekend.

As the show nears the fag end of the closure, Indian Idol 12 finalists will be announced soon. According to the current performances and fan base, Pawandeep will be the first finalist of Indian Idol 12. Apart from Pawandeep, Ashish, Danish, and Shanmukha Priya will be the other finalists. However, official confirmation is awaited regarding the same.