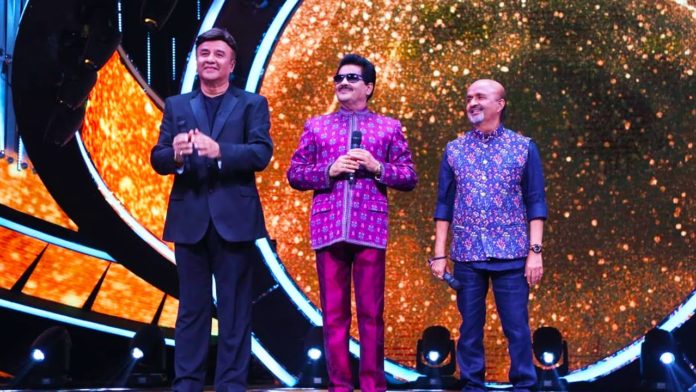 India’s biggest singing reality show, Indian Idol 12 is back this weekend with a heartwarming 90’s special theme. Indian Idol 12 makes its presence felt every weekend with its stellar bunch of talented singers. A vibrant and encouraging judges panel including Himesh Reshammiya, Neha Kakkar, and Vishal Dadlani will witness yet another weekend filled with melodious performances.

The episode on Saturday (20th of March 2021) for Indian Idol 12 will feature special appearances by legendary singers Udit Narayan and Anu Malik. Popular lyricist Sameer will flank the two singers. The veteran singers shower praises for some of the scintillating performances from the Idols of this season.

However, an interesting twist awaits the superstar of this season Pawandeep. Pawandeep performs for a heart-touching rendition of ‘Panchi Nadiya Pawan Ke’ song. A mesmerized Neha Kakkar and Udit Narayanan remain awestruck to see Anu Malik leaving the sets in a disgruntled manner after Pawandeep’s performance. However, this was just a prank on the young star.

Apart from Pawandeep, Sawai Bhatt, Ashish, and Danish are other standout performers. As expected, Sawai cooks up an amazing classical melody which enthralled judges, Himesh Reshmaiyya, and the special guest Udit Narayanan.

Sayli chooses an amazing song to make her presence felt in the 90’s special episode with an appreciable performance of ‘Tip Tip Barsa Paani’ and Udit Narayanan joined in singing with her. However, it would be interesting to see if Sayli made the cut to the next round.

As the show nears its decisive phase, Indian Idol 12 finalists will be announced soon. Accoridng to the current performances and fan base, Pawandeep will be the first finalist of Indian Idol 12. Apart from Pawandeep, Ashish, Danish and Shanmukha Priya will be the other finalists of this season. However, official confirmation is awaited regarding the same.