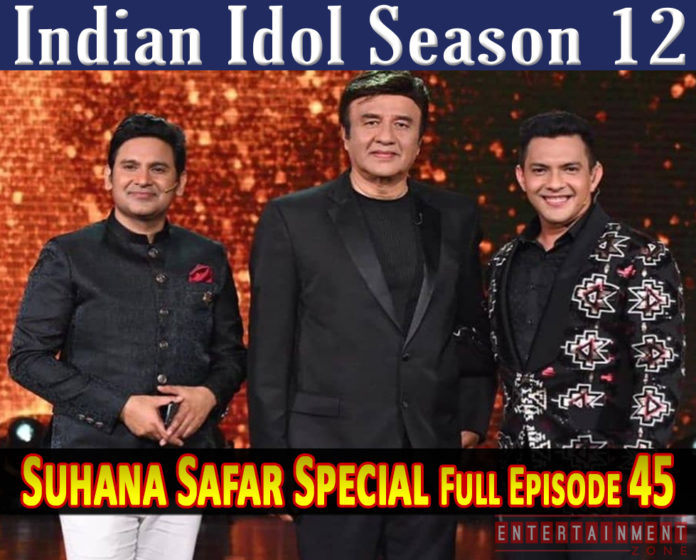 India’s biggest musical reality show, Indian Idol 12 is back this weekend with a melody-filled episode with special guests Anu Malik and celebrated lyricist and poet Manoj Muntashir. This will be followed by impressive performances by the top 9 contestants. The veteran singer Anu Malik will grace the performances during Saturday’s episode during the absence of judge Neha Kakkar. Himesh Reshammiya and Vishal Dadlani.

An awestruck and admirable judges panel including Himesh Reshammiya, Jaya Prada, and Vishal Dadlani will be missed this week to witness the impressive melodies from the 80s and 90s. However, six talented Indian Idols from season 12 were eliminated so far. The suspense of the seventh elimination continues to trigger the fans of the show for the last couple of weeks. Hence, this week’s performances will be critical for the top 9 Idols.

The episode on Saturday (1st of May 2021) for Indian Idol 12 will feature a special appearance by Anu Malik and Manoj. The musical living legends are here on the occasion of all three judge’s absence in this weekend’s episode. However, there were interesting twists in the episodes featured this weekend.

The amazing song from ‘Chalti Ka Naam Kaali’ was amazingly performed by Shanmuka Priya who collaborated with Idol Nihal this week. However, the potential finalist ensured stays at the top of her game.

Idol Sayli’s brilliant run in Indian Idol 12 continues to woo the special guests, judges, and audience. The divine voice gave a special touch to the song, ‘Milo Naa Tumko Hum’ which got Anu Malik impressed. Sayli is also one of the stronger contenders to enter the finals of Indian Idol 12.

Idol Ashish and Pawandeep are back this weekend. Popular lyricist Manoj Muntashir challenged the duo who wish to compose together. Manoj Muntashir promised to give them a set of lyrics and compose it on the spot. If the duo does a good job, they will get an appointment with the head of T-Series, Bhushan. However, it was an amazing performance for the duo.

The contesting Idols will perform on the Indian Idol 12 stage as they give their best efforts to continue in the coveted singing reality show. Six eliminations took place so far and the quest for reaching the top 8 intensifies this weekend. However, the mysterious twists await ahead of the seventh elimination of Indian Idol 12 for the last two weeks.

Four weeks ago, Nachiket Lele was the last contestant to be eliminated. However, the suspense around the next elimination of Indian Idol 12 will be revealed this week on Sunday.

Sahil Solanki, Vaishnav, Sireesha, Anushka Banerjee, and Samyak Prasanna were the other eliminations so far. According to reports, one male contestant will be eliminated this weekend.

Sawai Bhatt, and Anjali are in danger of elimination this week. However, will the Jaya Prada special give the contestants another breather?