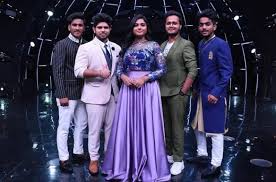 India grooves to the tunes that are sung on Indian Idol. This weekend India will come together to watch yet another finale of Indian Idol which will give India another sensation. Indian Idol 11 Grand Finale will be aired on Sunday, 23rd February 2020 on Sony TV. Last weekend brought forth the top five contestants who will compete to win the coveted title.

The top five contestants of Indian Idol 11 are Sunny Hindustani from Bathinda (Punjab), Rohit Raut from Latur (Maharashtra), Ankona Mukherjee and Adriz Ghosh from Kolkata(West Bengal) and Ridham Kalyan who hails from Amritsar (Punjab). This year the show has only one female finalist in Ankona. The plus point about a show like Indian Idol is that the contestants catch the eyes of music composers who want to sign them on post the show. This season this case is with Sunny Hindustani, he has been selling like hot cakes especially with Himesh Reshammiya, Amit Kumar and Shamir Tandon.

A post shared by Sony Entertainment Television (@sonytvofficial) on Feb 21, 2020 at 4:32am PST

This Friday saw the release of Ayushmann Khurrana starrer, Shubh Mangal Zyada Saavdhan. Ayushmann and his star cast wil be the special guests for the grand finale of Indian Idol 11. The audience can expect Ayushmann to croon to one of his famous songs as well. Adding to the funny element of an event as grand as this will be comedian Krushna Abhishek who plays Sapna on Sony TV’s hit show The Kapil Sharma Show. The top five contestants will fill your ears with melodious tunes as they perform onstage. There will be a performance by mentor Neha Kakkar and host Aditya Narayan possibly on their latest single.

A post shared by Sony Entertainment Television (@sonytvofficial) on Feb 21, 2020 at 6:28am PST

The winner of Indian Idol 11 is Sunny Hindustani.

Indian Idol Grand finale will air on Sony TV on 23rd February 2020 at 8PM. It will also be available on Sony Liv Premium, Jio TV, Airtel XStream and Vodafone Play. Indian Idol 11 will be replaced on Sony TV by India’s Best Dancer