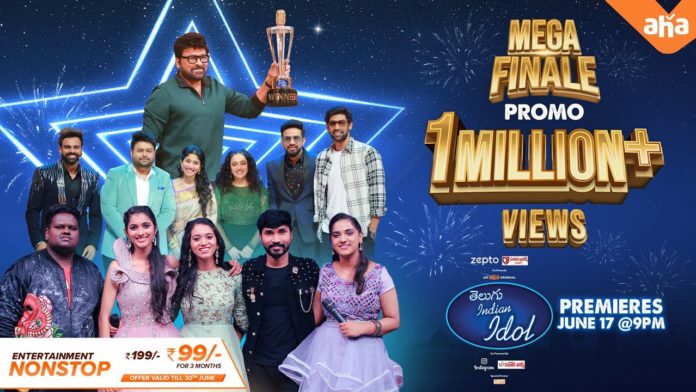 The first-ever Indian Idol winner was crowned in Telugu BVK Vagdevi from Nellore, Andhra Pradesh on aha. The mega celebration was graced with the charismatic presence of actor Chiranjeevi. The event’s panel of judges included Thaman S, Nitya Menon, and Karthik, who put on dazzling performances alongside the contestants.

The first season of Telugu Indian Idol hosted a series of outstanding performances, with Rana Daggubati and Sai Pallavi appearing on stage to promote their upcoming film Virata Parvam. Vagdevi has won the opportunity now to perform at Geetha Arts alongside a prize regarding Rs 10 Lakh.

Sreerama Chandra, a former Indian Idol season 5 winner and host of the first Telugu Indian Idol franchise, hosted the first season this year. Sreenivas and Vaishnavi ranked second and third in their bracket, each winning a cash prize of 3 million rupees. Vaishnavi got a chance to sing in Megastar Chiranjeevi’s upcoming movie Godfather.

Other than judges, mentors, and the people who helped support Winner BVK Vagdevi on this journey for the Telugu Idol competition, she would like to give them a lasting round of applause for all the joy her endeavors have brought into the lives of many people. She considers her latest achievement a huge success for her hard work over the past few months.

Aha enabled Geetha Arts to provide me a once-in-a-lifetime platform that is nothing short of a dream come true to me. I am grateful for the chance afforded to me as a result of Aha. In Ajit Thakur’s comment on the occasion of the first-ever AHA-hosted Indian Idol competition’s finale, he was happy about seeing contestants get a platform to sing proficiently and desire a larger stage to showcase their abilities. We have joined forces with highly impactful platforms like Indian Idol to bring ecstasy to the masses and now have brought that competition down South for the first time ever. We congratulate Vagdevi on her distinguished victory and identify everyone else that participated in the challenge.

All along the towns and villages of Nellore, Secunderabad, Vijayawada, and Amravati, athletes looked for contestants to compete on the show. The show is sponsored by Zepto, Chandana Brothers, Tenali Double Horse, and Happi Mobiles and others.