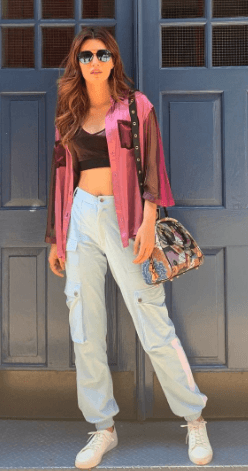 Bollywood actress Kriti Sanon was having fun at the Vogue Beauty Awards 2019 and her pictures from the event are trending on social media. Kirti Sanon looks very cute and hot in these photos. Kriti Sanon wore a stunning pink gown which looked sparkling. Kriti looked like a doll and her fans were very happy with her look. Kriti showed her stunning toned legs which made her fans sweat. Kriti Sanon’s sexy poses in these photos is creating ripples on social media especially on Instagram where she has around 25 million followers. This picture of Kriti Sanon is being well liked on Instagram and her fans are praising these photos with thousands of comments. Kriti was spotted at the Vogue Beauty awards by popular celebrity spotter, viralbhayani

Recently, Kriti Sanon appeared in the film Arjun Patiala with Diljit Dosanjh. Her brilliant performance in the film was well liked, although her film could not do anything special on the box. Earlier her film Luka Chuppi came. This film got a lot of love from the people. In Luka Chuppi, on-screen romance with Kriti Sanon and actor Kartik Aryaan was seen.

Kriti Sanon will be starring in the much awaited movie, ‘Housefull 4’. However, ‘Housefull 4’ is scheduled to release on the 2nd of October 2019. Kriti will be seen with Shahid Kapoor in ‘Farzi’ which is scheduled for a November 2019 release. Kriti’s historical drama appearance in ‘Panipat’ starring Arjun Kapoor and Sanjay Dutt will release in December 2019.