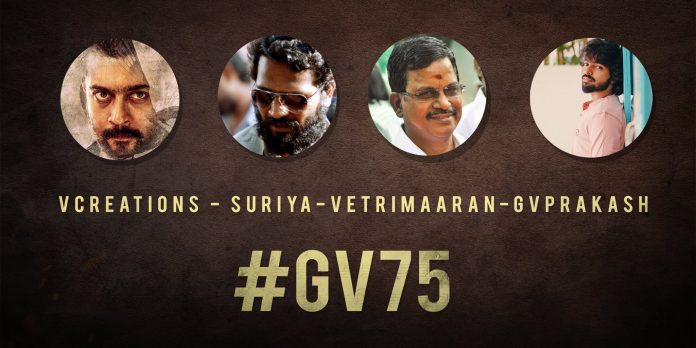 GV Prakash – Vetrimaaran combo have always worked well and he has shown that in their latest movie Asuran. Now the music director who is a busy actor returns once again to compose his 75th movie for Vetrimaaran. Actor Suriya who had last acted in Kaappaan, will be seen next in Sudha Kongara’s Soorarai Pottru, which is set to release this Summer. On the other hand, the actor had recently signed his 40th movie which will be directed by Vetrimaaran, who is fresh from the success of Asuran.


This movie, Suriya 40 is produced by Kalaipuli S Thanu in his V Creations banner, and was officially announced recently. Now it has been made official that this movie will have music by the talented composer GV Prakash, for whom this is the 75th movie.

GV Prakash has earlier worked with Suriya in the upcoming Soorarai Pottru which is his 70th movie, and with Vetrimaaran he has worked in Pollathavan, Aadukalam, Visaranai and the recent hit Asuran.

#GV75 Yes my 75th film as a composer is with my most successful director combination @Vetrimaaran … with @Suriya_offl sir as lead … produced by Thanu sir @theVcreations #GV75withSuriyaVetriVcreations pic.twitter.com/Lhy6s94MXK