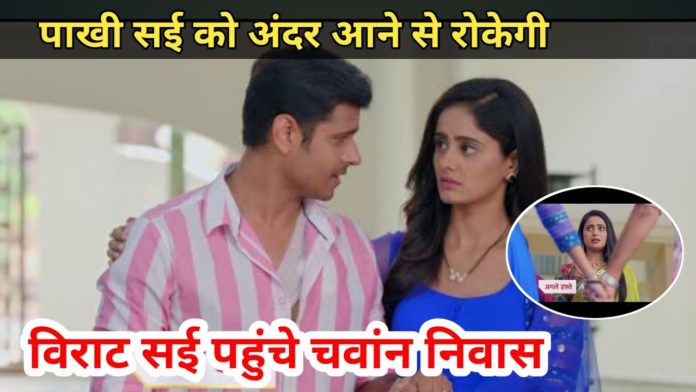 Sai and Virat come to Chavan House. Sayi (Ayesha Singh) remembers her humiliation. Virat says that this is your home. Sayi says that this is not her home, but she will stay here until Virat is fully recovered.

On the 12th May 2021 episode of Star Plus’s serial Ghum Hai Kisi Ke Pyaar Mein, we will see Bhavini call Pakhi at the hospital to ask Virat, When will I get off? That is when Ashwini says that there is no need. Virat is fine and coming back. Ashwini says that she is also happy about the return of Sai, so she has brought sweets. Sonali tells him that Sayi has refused to come back with Virat, yet why are you happy with his return? Ashwini tells him that Virat looks happy after so many days, so he is also happy, and Sayi was not responsible for what happened.

During this, Sai and Virat (Neil Bhatt) come to Chavan House. Sayi (Ayesha Singh) remembers her humiliation. Virat says that this is your home. Sayi says that this is not her home, but she will remain here until Virat is fully recovered. Bhavini taunts Ashwini by saying that you should have strongly welcomed Virat for his bravery, but it seems that you are more than happy with Virat for the return of Sayi.

Sayi and Pakhi Entry
Virat would tell Bhavini that whatever my mother does for me is her blessing. Sonali says that the moment Sayi came into Virat’s life, everything went wrong. Ashwini tells Virat and Say to ignore everything. Virat and Say come inside. Ninad forbids Virat to join duty immediately. Virat also says that Sai has not allowed me to join duty. Bhavini says that we are happy that you have come back, but why have you brought Sayi here.

Pakhi lies in front
Sayi tells everyone that she will leave after Virat recovers. Bhavini says that we can take care of Virat. We don’t need you Opposing Ashwini and Virat Bhavini, saying that Sai was really upset for Virat. Sayi questions Bhavini that Pakhi lied to everyone by using fake tears. I did not ask him to leave the hospital room. Seeing her theft, Pakhi says that she does not want to talk to him. Virat says that Sai also never lies. I only asked Pakhi to leave the hospital room so that he can take some rest.

Rescue of Sayi
Virat further says, Sayi also called Pakhi thanks for taking care of me. Pakhi asks Virat, why do you always have to defend your wife? Virat says that he is only telling the truth, which he did not tell Chavanas. Tomorrow we will see Virat tells Sayi that everything is incomplete without her in this house.