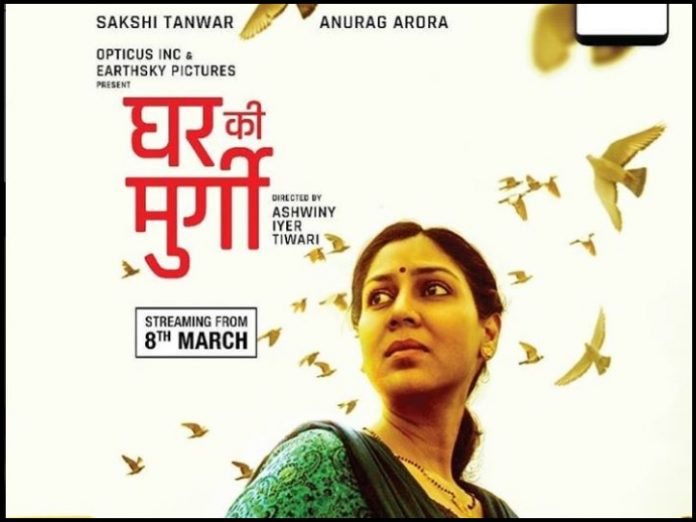 
After giving superhit films like ‘Panga’ and ‘Bareilly Ki Barfi’, director Ashwini Iyer Tiwari has brought a very beautiful short film. Ashwini has decided to release this film especially on the occasion of Women’s Day. In the film, Ladli Bahu of the small screen and now Sakshi Tanwar, who has made her own identity in films, is seen in the lead role. Ashwini and Sakshi have dedicated this short film especially to the housewives.

Another special thing of this short film is that its story and scripting is written by none other than Ashwini’s husband and noted director Nitish Tiwari. The film presents a picture of Indian society where a woman’s contribution to a family is always denied or ignored. This short film is being released in association with Sony Entertainment, which will premiere on March 8 on the occasion of Women’s Day. But before its release, we have brought a quick review for you.

Ghar Ki Murgi Short Film: What does the story say?

The story of the film is of Seema Batra who is a housewife. Along with the house, she also works in a beauty parlor to run a family and spends whatever money is there to run a house. Along with helping to run the household expenses, she also takes care of the old Batra family. Along with Seema, her two children, husband and sick mother-in-law also live.

From waking up first in the morning to sleeping in the evening, Seema takes care of the needs of every member of the family. But when it comes to his contribution at home, he is denied outright. Seema is a bit hurt by this behavior of the family and she makes up her mind that she has to go to Goa on a month’s leave. When Seema tells her husband about this, her husband asks that if she stays at home, why does she need a holiday?

After this, Seema’s patience is broken and she expresses her feelings. After seeing Seema’s anger, the whole family realizes that Seema is also important in the house and she continues to work for the whole family without any complaints. Now after this how does Seema’s family celebrate her? And whether or not she is able to go on Goa holidays, you will have to wait till March 8 and watch the entire short film.

The story of the film is written by Nitesh Tiwari and is directed by Ashwini Iyer. Both of them are expert in their work and they have proved themselves once again with this short film. It is not necessary to make a three-hour film to tell your story and give an effective message from that story. A beautiful story can be told in less words and less time. Apart from the direction, if you talk about acting, Sakshi Tanwar will once again appease the audience with her simplicity on screen. In the film, Sakshi seems very comfortable in her character. After seeing her on screen, it seems as if she is not acting but she is Seema Batra herself. There is a perfect short film to be released on the occasion of Women’s Day.