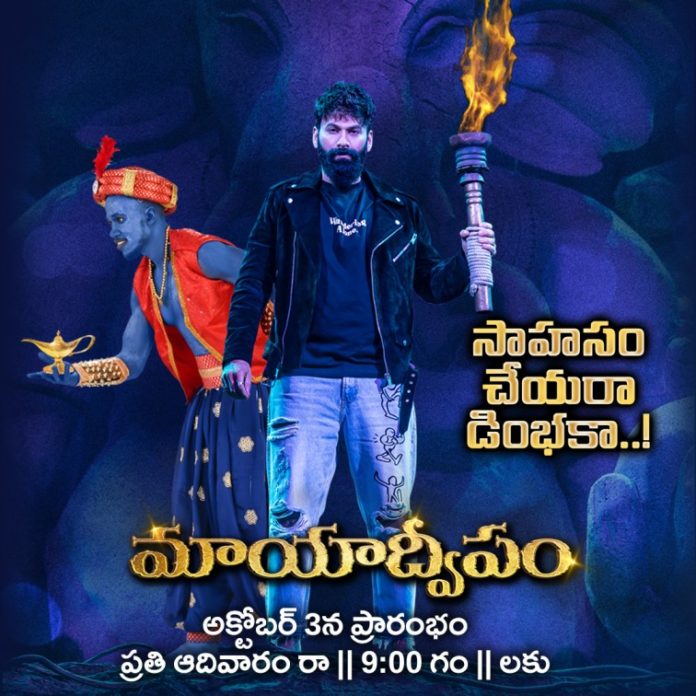 Everyone has grown up listening to and enjoying folk tales, being absorbed into the world of captivating storytelling and adventures. No matter how much one likes to be part of such stories, chances are very few. But, if one gets a chance to solve mysteries and live larger, then? After the resounding success of the previous season that left viewers demanding for more, Zee Telugu presents ‘Mayaadweepam’ with another exciting season after seven long years. Ohmkar, dearly called Annaya (big brother), returns as the host along with the legendary Pillamarriraju and Onti Kannu Rakshasudu starting from 3rd October at 9:00 PM only on Zee Telugu and Zee Telugu HD.

Mayaadweepam is a magnum opus adventure game show that unearths the skills of young contestants such as the physical, intellectual, satirical, and educational ability. An artistic rendition of the Hindu sculptures, the show is all set to enchant viewers with its grandeur and creative games. Boasting of its exceptional designs and intricacies, the set is one of the most composite set ups of Telugu television in today’s time. It took a crew of over 100 members to bring a vision to life, filled with grandiosity and magnificence. The team worked for over 50 days to bring alive Mayaadweepam’s larger-than-life world through the setting by beautifully blending India’s rich mythic structures to give viewers and an affluent viewing experience.

Ohmkar, the host and the producer of the show says, “Mayaadweepam is my dream project. It marks my foray into the fantasy genre and empowers me to explore further variants of content. As we march onwards, we bring together not only the show’s original characters such as ‘Pillamarriraju’ and ‘Onti Kannu Rakshasudu’ but also the uniquely monumental set that is one-of-a-kind in the history of Telugu television. Besides, I’m happy to see the promo receive tremendous praises and I am certain that it makes for an unforgettable viewing experience.”

After giving the audience a taste of superlative talent kids in the previous season, this year Zee Telugu announced digital auditions for Mayaadweepam. Participants between the age of 6-12 years were invited to participate in the virtual auditions, from the safety and comfort of their homes and this helped the channel receive 12000+ entries in a short period of time. The selected participants will be part of the game show where every episode will witness 4 different contestants. Each episode will end with a ‘Showdown’ in which the contestants will be undergoing various levels of challenges. At every level, the contestants would be tested on their timeliness, physical abilities, intelligence, memory power, followed by their singing and dancing skills. As they surpass all the levels, they will enter Pathala Lokam to fight against Onti Kannu Rakshasudu and reach the Adbhutadeepam.

Experience the first of its kind visual spectacle Mayaadweepam from this Sunday, 9:00 PM only on Zee Telugu