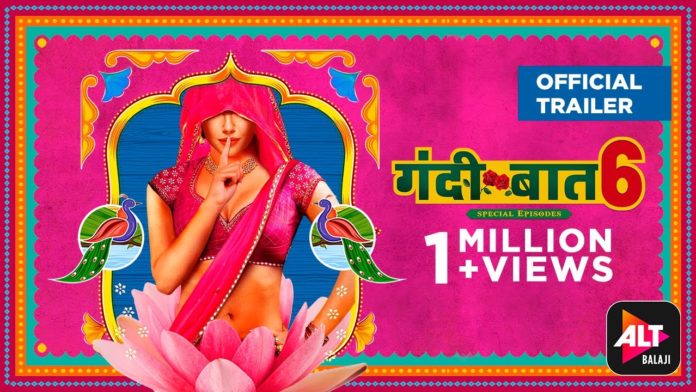 Ekta Kapoor tried her step into the world of films and web series after acquiring the title ‘Queen of Daily Soap’ in the TV world. Through her ALT Balaji, Ekta Kapoor has made a name in the web series world, thereby making content for the OTT platform.

Ekta started her adult and glamorous web series ‘Gandii Baat.’ This series received an excellent response from the audience. Now all the fans are eagerly waiting for ‘Gandii Baat 6′. Today, fans’ wait is over, and the Gandii Baat season 6 trailer has been released on YouTube. Like every season, this season is also full of glamorous and bold scenes. This trailer is getting many views on YouTube, and people are also showing interest in watching it.

This trailer got more than 6 lakh views in a short span of time. Steamy hot scenes have appeared in this trailer. Also, the suspense of murder mystery is shown. This web series includes artists like Mahima Gupta, Alisha Khan, Kewal Disani, Nidhi Mahwan, Shivam Mehta, and Mohit Sharma.

After Gandii Baat season 5, people are eagerly waiting for season 6. All seasons of this web series have been super hits. This web series will be available to watch on ALT Balaji from Thursday 21st January 2021.