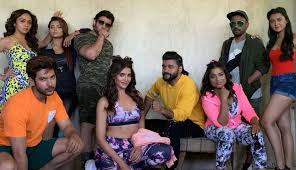 The popular celebrity based action show Khatron Ke Khiladi will begin its 10th season. Ace Bollywood director Rohit Shetty has shot the show with his contestants in Bulgaria. This is Rohit Shetty’s fifth stint as the host of the show. Twelve celebrity contestants go headfront with their deadliest fears and perform a series of stunts which could be immensely dangerous if not under supervision. They will compete in these stunts to win the title.

Khatron Ke Khiladi season 10 will be hosted by ace director and action fanatic Rohit Shetty who has also hosted the last five seasons of the show.

In the 10th season of the show, lots of television stars are coming together to face their fears and emerge victorious. As always, the list of participants every year is very interesting considering the biggest names of the television industry are included every year. This year has the most exceptional contestant list as everyone is one up the other. Here are the contestant names for Khatron Ke Khiladi Season 10.

A famous figure in the industry, Mallishka Mendonsa is a RJ who works for Red FM 93.5.She has been born and brought up in Mumbai. Mallishka has completed her graduation in Political Science from St. Xavier’s College, Mumbai. She has even done her post graduation in Marketing and Advertising. She later realized that this wasn’t her cup of tea and she didn’t have much interest in the same. Mallishka appeared in a television serial ‘Connected Hum Tum’, this shot her up to fame as it was aired on Zee TV. The show revolved around six women who would be creators of videos and would post these videos on television. Mallishka’s bold and aggressive attitude in the show was hugely appreciated. She went on to become a very popular radio jockey in India.

A prominent figure in the Bhojpuri industry, Rani Chatterjee is an Indian actress by profession. She was born on the 3rd of November 1989. She completed her schooling at Tungareshwar Academy High School, Vasai, Maharashtra and further on her graduation from the University of Mumbai. Her moment to fame was when she played the role of Rani in a Bhojpuri film titled Sasura Bade Paisawala in 2004, Rani is better known as the Queen of Bhojpuri cinema and has fans across the world that love and adore her.

The heart of television Karan Patel is also a contestant this season. Karan is famous for his work on the small screen. He was born on 23rd November 1983 and completed his primary education at Utpal Sanghvi School, Juhu, Mumbai and went on to complete his graduation from Mithibai College in Mumbai. His popularity broke the charts when he went on to play the role of Raman Bhalla on the famous Star Plus show, Yeh Hai Mohabbatein. Karan has always been in the news may it be for his link ups, affairs and his acting chops for sure. He has the ability to catch the eye with his good looks and talent. Karan very recently became a father to a beautiful girl. Karan has a huge fan following especially among the girls.

Known for her good looks and her exceptional work on the small screen, the next contestant is Karishma Tanna. She is an Indian actress, model and dancer. Born on 21st December 1983, she completed her early education at a private school in Mumbai. Karishma went on to finish her graduation from Sydenham College of Commerce and Economics in Mumbai. Karishma participated in the country’s most controversial show Bigg Boss 8 and shot to fame. She has been a part of the television industry for many years but Bigg Boss made her a household name. She has a huge fan following among people who love her bold attitude and mainly her acting.

Born on 12th May 1989, Adaa Khan is an Indian television actress and model. She is majorly known for her work on the small screen. She did her schooling at a private institution in Mumbai. Adaa has done her graduation in English literature and her master in sociology from the University of Mumbai. She has played the role of Shesha in the television show Naagin and this was her shot to fame. She has millions of followers across the world who shower her with love.

Shivin Narang was born on 7th August 1990. He is an Indian actor and model. He is mainly known for his work in the television industry. Shivin completed his schooling from Summer Fields School, New Delhi and even completed his graduation in BBA and B.Com from University of Delhi, New Delhi. His staircase to fame was when he played the role of Yuvraj in the serial Suvreen Guggal- Topper of the Year. His followers adore his good looks and great acting skills and this is reflected through the number of followers he has.

A figure known for his dancing skills and choreography who ventured in acting and is famous among the young and ambitious is none other than Dharmest Yelande. He is mainly known for his dancing. Born on 31st October 1983, Dharmesh completed his early education from Baroda High School in Baroda, Gujarat. He rose to fame after his stint in the dance reality show Dance India Dance 2 which aired on Zee TV. He ended up becoming a runner up on the show and since then he has only accelerated ahead. His smooth and crisp dance movements are famous across the world and with millions of his followers.

A prominent face in the Indian stand up comedy sector is Balraj Syal. He is an Indian actor, writer and achor as well. He is known for his work on the small screen industry and has a great cominc timing which leaves you in splits. He was born on 26th January 1983 and completed his early education at Shree Parvati Jain Co-Education Senior Secondary School, Jalandhar. He went on to do his graduation in Jaldandhar as well. He rose to fame with his comedy shows like Entertainment Ki Raat and Comedy Circus Contestant. Balraj boasts of a strong fan base due to his amazing comic timing. He has even got himself a place in the film industry owing to his talents.

Indian television actress, model and musician Tejaswi Prakash is also a contestant on Khatron Ke Khiladi. She is known majorly for her work in the television industry. She was born on 10th June 1992 and completed her early education from a private institute in Mumbai. She received her degree as an Electronics and Telecommunication engineer from the University of Mumbai. She shot to fame for her role as Ragini in the show Swaragini which aired on Star Plus. She is currently one of the most prominent figures in the television industry. She has a huge fan following from people across the world for her skills and ofcourse good looks.

Marathi actress Amruta Khanvilkar doesn’t cease to amaze her fans. She was earlier confined to the Marathi industry but has spread her wings into Bollywood and the small screen industry. Born on 23rd November 1984, Amruta completed her early education from Ashok Academy in Mumbai. She finished her graduation from St. Xavier’s College in Commerce and Economics. Amruta shot to fame when she won the dance reality show Nach Baliye 7 along with her husband Himmanshoo Malhotra. Amruta is a huge name in the Marathi film industry and has prove her mettle time and again. She has entered Bollywood movies and has recently shown her skill in Malang. She has a huge fan following who adore her and her work.