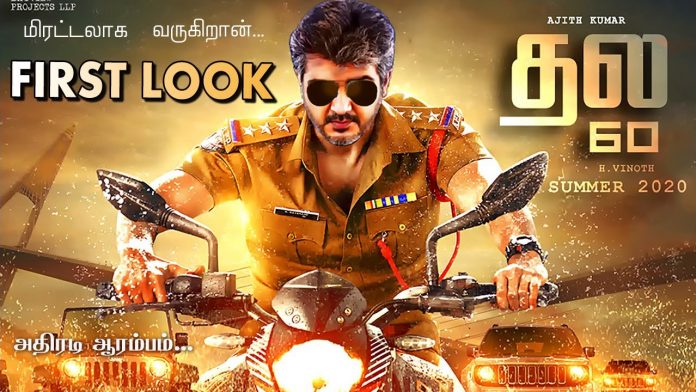 Thala 60 is one of the most expected movie for the year 2020. Ever since the release of “Thala 59” Nerkonda Paarvai directed by H.Vinoth Ajith Kumar’s fans are eager to know about his next movie “Thala 60”. It will be directed by the same director who gave him the successful remake Nerkonda Paarvai and hence the expectations are high. Thala 60 is expected to have high octane stunts and Ajith Kumar is expected to don a police officer role in this movie. He was seen recently taking part in a shooting competition at Delhi, this would help him in getting his action sequences in a genuine way for Thala 60.


Here is an exclusive update for the fans about Thala 60. The title of Thala 60 seemed to be leaked, Ajith Kumar prefer his movies title starting letter in “V” and the assistant directors of Vinoth came up with 100 or more Titles for the movie starting with V. Ajith Kumar has selected one of them and it may be the title of this movie. He has selected “Valimai” as the title of the movie and the title was held by another production company, they released the title on Ajith’s request. Hence it’s confirmed that Ajith Kumar’s next movie Thala 60 is titled as “Valimai”. Do you like the title? Comment below.

Proud To Share This Terrific Fan Made Poster of #Thala60 Aka #AK60 Movie ??