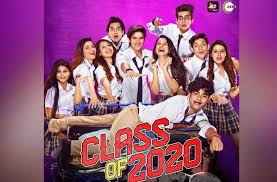 The much awaited web series by ALTBalaji and ZEE5 dropped the first look of the upcoming show Class of 2020 yesterday. The trailer was released today, 25th January 2020. Created and produced by Vikas Gupta’s The Lostboy Productions. The series is a sequel to ALTBalaji’s popular web series Class of 2017. It is a coming of age teen drama that revolves around hormones overflowing.

The show rotates around the central characters and the struggle they face when their lives get entangled with school, relationships, friendships and moreover peer pressure.

The story deals with the lives of Ibrahim, Ranchi, Alia, Ronit, Hardik, Priyanka and Zoey and their time at De Nobili High. How they handle their various relationships, constantly experimenting with the same. They get schooled thoroughly and constantly deal with chemistry.