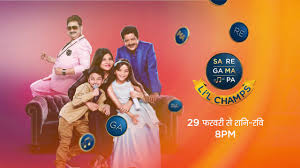 Sa Re Ga Ma Pa L’il Champs a singing competition television series, airs on Zee TV and its online platform for streaming is the Zee5 App. Children from across the nation participate in the show and are based individually on the basis of their voice quality, talent and versatility. The show even takes into consideration the contestants growth as to a refined singer. This show is a stepping stone to young talent across the nation to polish their skills. The children are between the age gap of 5-15 years. The last season of the show was hosted by Ravi Dubey and judged by Amaal Malik, Richa Sharma, and Shaan. The winner of the previous season was 14 year old Sugandha Date. The show aired on Zee TV from 29th February 2020. It airs every Saturday and Sunday from 8 PM.

@therealalkayagnik + @uditnarayan_official + @kumarsanuofficial = Golden Music of the 90s ❤ Tune in to @zeetv this Saturday at 8 PM and watch the Golden 90s special episode of #SRGMPlilchamps! #mp #show #reality #music #era

Sa Re Ga Ma Pa L’il Champs always has a griping and entertaining host. Every season gives the audience a host who enlightens the audience and cracks them up at all times. This season it was reported that Jay Bhanushali would host the show but last minute celebrity host Maniesh Paul took over the reins of the show and is currently leading the path.

The audition process is very taxing and it screens through many young stars in the making to select those few children who will be the contestants on Sa Re Ga Ma Pa L’il Champs. This year the stage will be lit on fire by the following young singers.

How to vote for your favorite contestants

For SMS Voting every contestant will have their unique code which will enable the audience to vote offline. The entertainment industry is currently booming and is hugely digital. There are a number of ways of voting offline which includes missed call voting and SMS voting. Every method uses a separate platform to work.