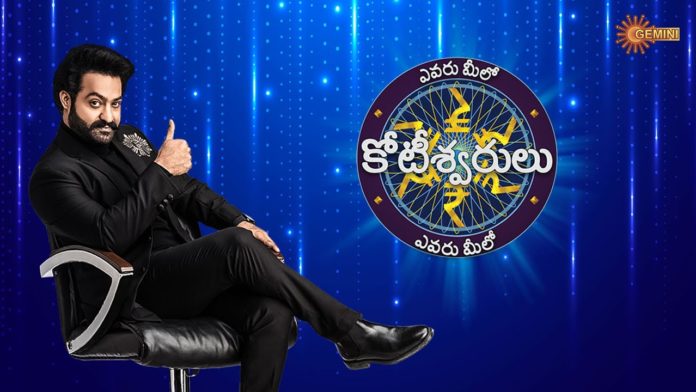 It is known that Junior NTR is preparing to greet the Telugu audience through television soon. He is preparing to host one of the reality game shows, ‘Evaru Meelo Koteeswarulu.’ The show will premiere on Gemini TV. Some key points about it have been leaked. Here are the details

Evaru Meelo Koteeswarulu’s show was created by being inspired by the popular show ‘Crorepati.’ The show is already slated to launch on Gemini TV. It is said that a recent episode was also shot.

Akkineni Nagarjuna and Chiranjeevi previously hosted the show. Now Junior NTR is going to host the show. Having had the experience of hosting the Bigg Boss show successfully in the past, he is now ready to hit ‘Evaru Meelo Koteeswarulu’ as well. Expectations on the show have been rising since he said his name was Rama Rao in a promo released a few days ago.

According to the latest information received, the show will start on August 15 on Independence Day. The first episode is planned to be grand. It is said that mega power star Ram Charan is the first guest for the show ‘Evaru Meelo Koteeswarulu.’ It is said that there was a shooting related to this. It is said that the promo will also be released as soon as possible to increase the hype.

Trivikram’s Aravinda Samatha Veera Raghava has come to the forefront of the audience when it comes to NTR movies. But he is going to appear on television through the show ‘Evaru Meelo Koteeswarulu’ to give a surprise to his fans.