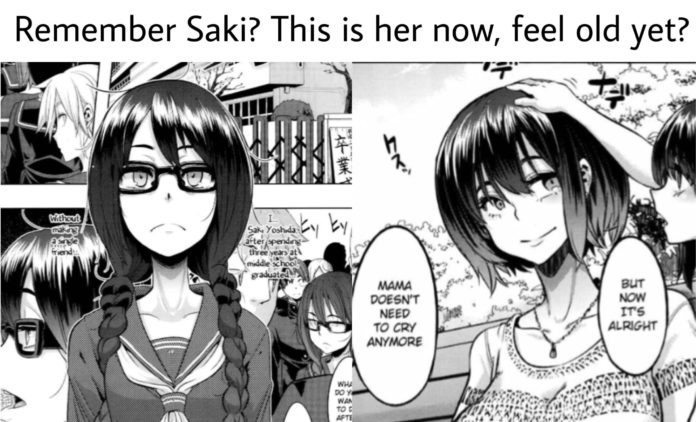 The Reddit groups and Twitterati, are abuzz with activity and theories on this. The consensus it will be released the next year in 2022, and they are eyeing a Spring release. April 2022 would be the tentative month, according to sources. Emergence is also known for its infamous dark ending. Would this translate well as an anime? Reports suggest that the dark ending would be sanitized for the big screen.

In the ending in the manga, Saki pregnant and addicted to heroin dies with an overdose. After getting brutally beaten by her previous classmates and suffering grievous injuries. She laments for the girl she used to be. This manga is so dark, that there are so many posts and threads warning readers to not read it at all.

Saki Yoshida, a young 15-year-old, wishing to be popular gets a makeover. This gets her the wrong kind of attention, as a predator drugs and rapes her. She accepts it as love, due to her innocence. Things get worse, as Saki tries to fit in with her current lifestyle. She begins to solicit clients online, to make ends meet. Things get worse, as she is kicked out of her house.

Saki then meets the predator Hayato, who gets her addicted to pills and cocaine. He makes Saki believe that he loves her while turning her into a prostitute. Saki dives farther into the seedy world of sex work and hard drugs. She meets clients who debase and rob her. Saki eventually becomes pregnant and develops a dangerous addiction to heroin. She is unable to get over her addiction. As Hayato dumps her for a new girl, she falls in deeper.

Saki ultimately meets a heartbreaking end. This manga is truly not for the faint of heart. But how the anime adaptation will broach this subject, remains to be seen.