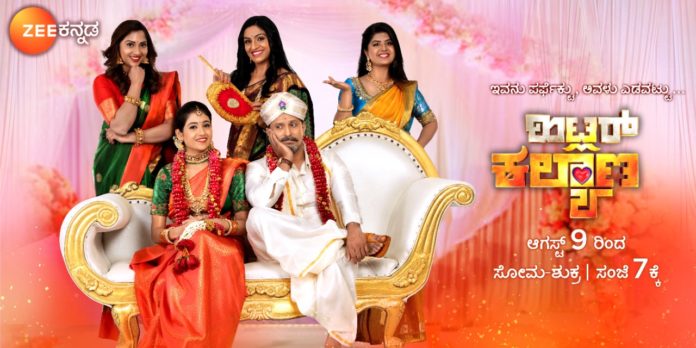 Zee Kannada has always stood for its progressive and entertaining storytelling brand, which has resonated with Kannada audiences, young and old alike. Starting its inception to now, the channel has created lovable and dynamic characters who have redefined Kannada entertainment on television and made it more enjoyable for the family to watch together. This 9th August 2021 at 7:00 PM Zee Kannada premieres the distinctive story Hitler Kalyana where the lead characters Ram and Leela appear as chalk and cheese and yet commence a relationship together.

In a role reversal to the typical ‘Atte Sose’ relationship, three daughters-in-law set out in search of a suitable bride for their father-in-law Ram, and each, for their own vested interests, gets him married to Leela. Leela is a bubbly, talkative, and carefree girl who is a little clumsy. She often hears the phrase “You can’t do it, Leela,’’ yet she never gives up. On the other side, Ram is strict and disciplined; he is synonymous with the word ‘perfection.’ Being a new mother-in-law in a household where the older daughters-in-law have ruled the roost for the longest time, Leela is the quintessential inexperienced outsider faced with resistance and challenges. Embracing insecurities and questioning the perception of perfection will be Zee Kannada’s novel story, Hitler Kalyana.

Raghavendra Hunsur, Business Head of Zee Kannada and Zee Picchar said, “There are many in life who are quick to point our weaknesses and curb our confidence by saying “Nīvu adannu māḍalu sādhyavilla.” Hitler Kalyana’s feel-good story will make you realize that not everything needs to be perfect to make things work. The story will follow the journey of a girl who has been doubted her entire life but doesn’t lose her optimism. Through her innocent and earnest attempts, she displays a never-say-die spirit that is truly endearing. The story is entertaining and motivating all at once. We have a stellar cast on board and hope to put a big smile on Karnataka with the show!”

To witness Ram & Leela’s unique journey, tune in to Hitler Kalyana starting 9th August 2021, every Monday to Friday at 7:00 PM only on Zee Kannada and Zee Kannada HD!