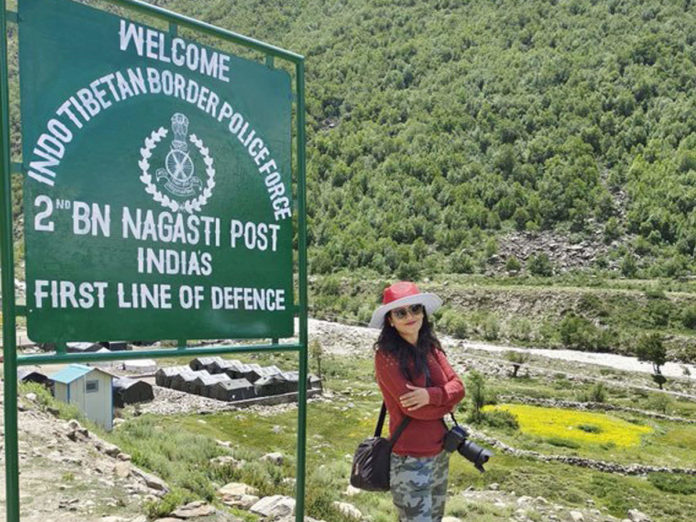 For some tourists who came out to cherish the natural beauty of Himachal Pradesh in their memories, Sunday afternoon came as a time of disaster. 9 killed and 3 injured in landslide in the Kinnaur district. One of the dead was Dr. Deepa Sharma. Deepa was just 34 years old and was constantly sharing her trip to Himachal on social media. Just minutes before her death, she had also tweeted a photo of herself.

Life is nothing without mother nature. ❤️ pic.twitter.com/5URLVYJ6oJ

With this photo, she wrote, ‘I am standing at the last point of India, beyond which citizens are not allowed to go. About 80 km from this place is the Tibetan border, which China illegally occupies.

Deepa was sharing photos from her trip

Standing at the last point of India where civilians are allowed. Beyond this point around 80 kms ahead we have border with Tibet whom china has occupied illegally. pic.twitter.com/lQX6Ma41mG

For the first time went to visit the Himalayas alone
Shortly after this tweet, her tempo traveler was hit by a landslide. Four women had died in this accident. Most of those who died were from Jaipur. Deepa herself was also from Jaipur. A dietician by profession, Deepa Sharma had gone out alone on the Himalayas for the first time. But little did she know that this would be her last visit.

Tribute on Twitter
People started paying tribute to her as soon as he got the information about her death. One Twitter user wrote – I will always remember you as a super energetic, fun-loving, and beautiful person. may your soul rest in peace.’

Really shocking and devastating.
She was a nature lover and Nature took her.
Om Shanti🙏#deepa

This is so shocking.
After posting this, @deepadoc lost her life in a land slide at himachal. Seriously, life is so unpredictable.
According to presswire18 This was the first time when she decided to discover himalayas along.
RIP#DeepaSharma #HimachalPradesh #MaharashtraFloods pic.twitter.com/2Q1XoAem38

CM tweeted
Himachal CM Jai Ram Thakur tweeted, “I spoke to Kinnaur district administration and inquired about the accident and gave them proper guidelines. The administration has started relief work, and immediate relief is being provided to the affected. May the injured people get speedy recovery, I pray to God.’ Prime Minister Narendra Modi has announced a grant of Rs 2 lakh to the next of kin of the deceased and Rs 50,000 to the injured from the Prime Minister’s Relief Fund.