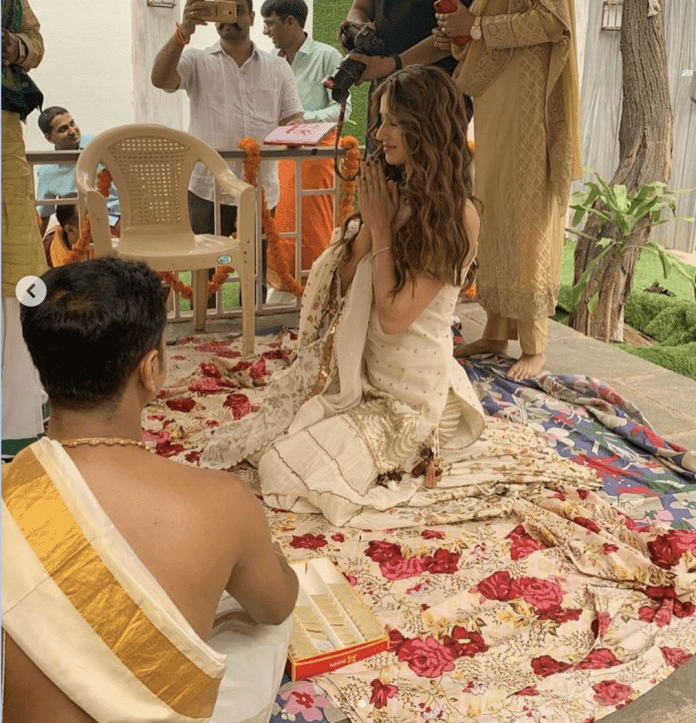 Bollywood star Disha Patani is busy preparing for the fourth blockbuster film of her career. The ‘Baaghi 2’ star is now going to become Salman Khan’s heroine after ‘Bharat’ once again, and she is very excited for it. Salman Khan and Disha Patni are going to appear together in the movie Radhe- Your Most Wanted Bhai. Bollywood’s Bhaijaan is going to bring his film on Eid of the year 2020.


The shooting of the film has started, and on the very last day, Bollywood superstar Salman Khan announced it through a banging teaser video from the film’s set. But now Salman Khan’s heroine Disha Patani has also informed her millions of fans in the morning about the Muhurta Puja performed on the set of the film Radhe. For the Muhurta Puja of this film, Disha Patni is wearing a very beautiful off white color ghagra-kurti and she looks very cute in it. In this dress for golden work, the direction looks very simple and elegant. While sharing these photos, Disha Patani has captioned, ‘Hashtag Radhe, Muhurt Pooja’

Salman Khan’s film will be released by Makers on the Eid of 2020. But before this, the actor’s film Dabangg 3 is ready to hit theaters and is going to be released on Christmas. Salman Khan will once again appear on screen with Sonakshi Sinha in this film. Apart from this, Bollywood superstars are also launching Mahesh Manjrekar’s daughter Sai Manjrekar with this film. Whereas in his next film Radhe, Disha Patni is ready to show her magic on the silver screen once again.