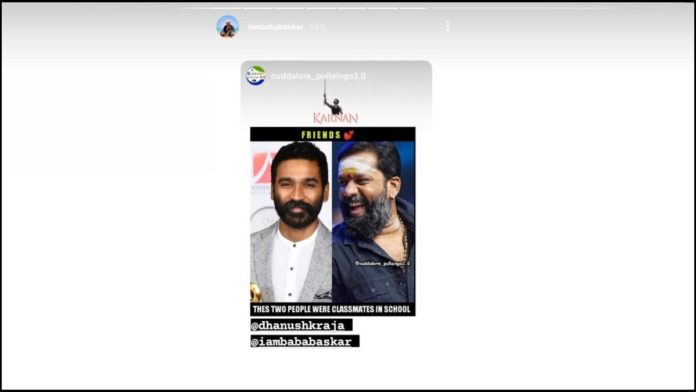 One of the celebrities through ‘Cook with Comali’ is Master Baba Bhaskar, who won the hearts of the fans by making it to the finals of the show.

The news went viral on the social networking site that ‘Cook with Clown Baba Bhaskar’ and actor Dhanush had studied together in this situation. But how could they have read together that the two were two years apart and that Baba Bhaskar was two years older than Dhanush? A few people questioned that.

An old video of Dhanush has responded to this situation. Speaking at the music launch of Dhanush starrer ‘Kodi,’ Dhanush said, ‘Bhaskar and I studied together till the eighth.’ Baba Bhaskar, who was nearby, intervened as if to admit it. This video is a testament to the fact that Dhanush and Baba Bhaskar studied together. It is a well-known fact that Baba Bhaskar has been the choreographer for most of the films starring Dhanush.