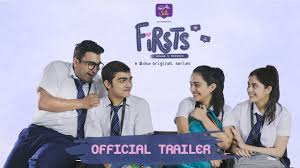 Firsts is a novel web series that is very interesting and different from the usual. Firsts was launched on the Dice Media Instagram channel. Instagram was used as a platform for the series broadcast. The web series is directed by Nayana Shyam and written by Pranav Tonsekar. It has been produced under the Pocket Aces banner. First stars youth sensations from the web platform Rohan Shah, Apoorva Mehta, Urvi Singh and Viraj Ghelani in the main roles. Firsts is a one of a kind series and a breakthrough show as before this there has never been collaboration between the digital media filmmakers and the popular channel. The show released on 31st January 2020 and has since then won hearts.

Firsts is a web series that deals with everything that happens for the first time in the life of a student. Through this we go back to our school days and recollect every first that we had. The trailer got the attention of the viewers considering its short span of time. People were drawn towards the episodes as they are just a minute long. The trailer is delightful with an engaging portrayal of all the major firsts that happen in a relationship. Right from the first eye contact uptil the first date or kiss.

Firsts is a teen love story between Rohan and Apoorva. It is love at first sight with their characters, the moment you see they get lost in each other’s eyes, and you know they will fall in love. With every episode they explore a new first and their relationship grows. They smile at each other, share chocolates, eat gol-gappas after school, spend hours on the phone, bunk tuition’s to get together and even fight over minuscule things. The tiny things that they share with each other including revealing that they like one another and making their relationship more genuine. Each episode is one minute long and available on Dice Media’s Instagram Page. There are twenty four episodes in total.

Firsts stars digital media sensations Rohan Shah, Urvi Singh, Apoorva Arora and Viraj Ghehlani. The actors are apt for the characters that they play in the series and coming from their huge base that they have each created in the world of web series it will be interesting to see their take on the character portrayal in the show.

Firsts is based on a very simple scenario that unfolds between two people who from the culmination of their love story share every first with one another. It is highly relatable since every person goes through these firsts in their life. The small moments of a blossoming school romance takes you back to your own school life. How there is a growth from one’s crush, then love and eventually become a couple. The actors Rohan Shah and Apoorva Arora have reflected the actual innocence during adolescence which needed to be showcased through the characters.

How to Watch Firsts?

Firsts is a one of a kind web series that has been released on Instagram from streaming. To watch Firsts follow the next few simple steps: