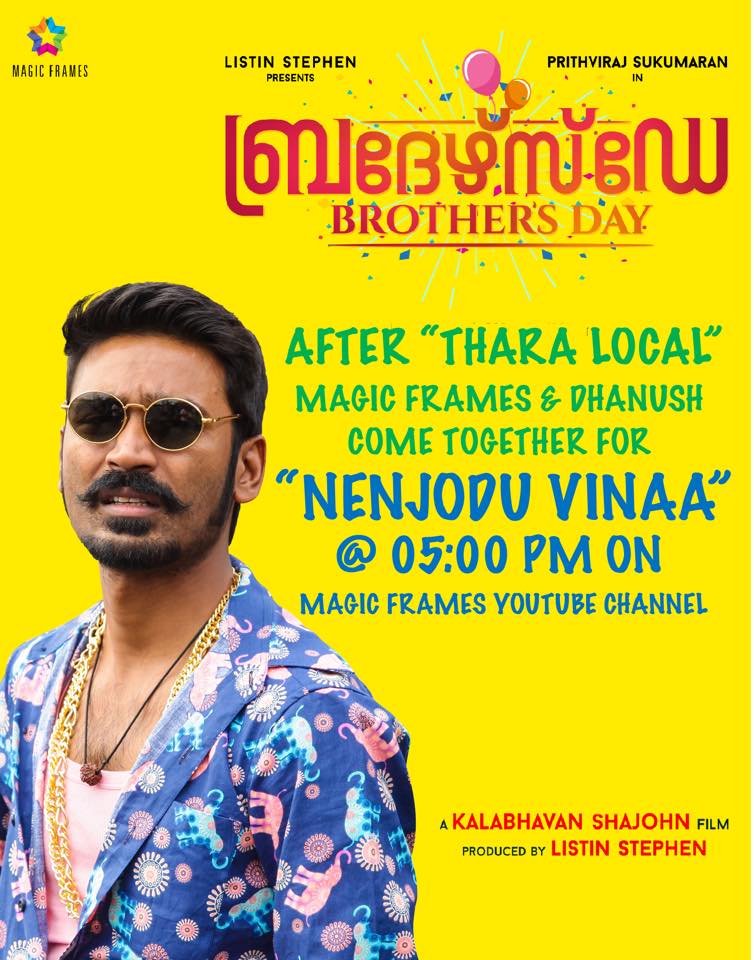 Tamil cinema’s superstar Dhanush is taking the musical journey with his own lyrics and voice for the song ‘Nenjodu Vinaa’. The song “Nenjodu Vinaa” will be featured in the movie ‘Brother’s Day’, a Prithviraj Sukumaran starrer.

The “Nenjodu Vinaa” lyrics video was revealed today, the 27th of August 2019 at 5:00PM IST in the Facebook page of Magic Frames, the production house for ‘Brother’s Day’.

The highlight of this song “Nenjodu Vinaa” is the fact that it has 4 musics – Jim Jacob, Eldhose Alias, Biby Mathew, and Justin James.

The song is winning hearts already and Prithviraj and Dhanush are showering praise for the same as well.

It is exciting to see Dhanush adorn the singer avatar after his sensational worldwide hit “Why this Kolaveri Di?” under the music of Anirudh Ravichandar.

Brother’s Day is a movie from the house of Listin Stephen’s Magic Frames. The shooting began in March. Brother’s Day will hit the screens during Onam.

Kalabhavan Shajon, is adorning the director avatar in the film after being known for his character roles and comedy. Nadarsha is the music composer for the movie.

The trailer of Brother’s day has more than 1 Million views within 3 days of its release.