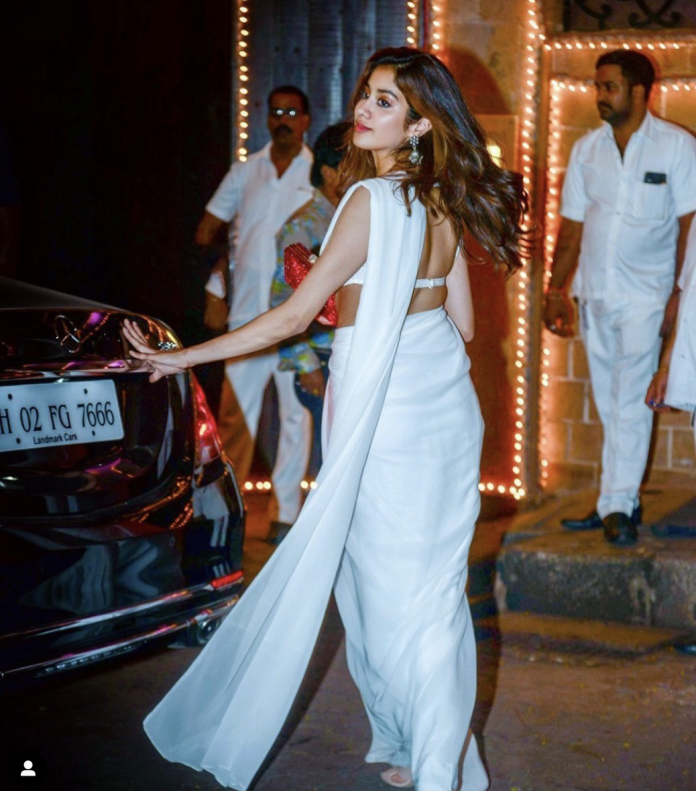 Janhvi Kapoor, daughter of late actress Sridevi, often rules the hearts of fans, not just on social media due to her dressing sense and looks. Recently, Janhvi Kapoor attended a Diwali party at the home of Bollywood megastar Amitabh Bachchan. Janhvi wore a white colored saree at this party, in this traditional dress, she shared a picture on her Instagram.


Let us tell you, Janhvi Kapoor shared this very cute and stylish picture in a simple coloured sari just a few hours ago. During this time, after seeing Janhvi Kapoor in ​​this avatar, the eyes of all the fans present there were glued to her. More than 5 lakh fans have liked this picture of Janhvi so far. Just seeing this photo of her, it is spreading like fire on the Internet.

Talking about the workfront, Jahnavi made his debut with the film ‘Dhadak’ (Dhadak) directed by Shashank Khaitan last year. In this film, he was accompanied by Shahid Kapoor’s brother Ishaan Khattar in the lead role. This cute couple of Jahnavi and Ishaan were well liked by the audience after watching them onscreen. Jahnavi is also in the news for his upcoming film ‘Gunjan Saxena: The Kargil Girl’. His film is based on the life of Indian Airforce pilot Gunjan Saxena. A poster of this has also been released a few days ago. In the film, Pankaj Tripathi will be seen playing the character of Pankaj Tripathi’s father and Angad Bedi’s brother.

Wearing the Nykaa Strobe & Glow highlighter in Gold Mine ✨ this Diwali ❤️

Apart from this film, Jahnavi will also be seen in Takht, Roohi Afza and Dostana 2. All these films of Jahnavi will be released in the coming years and the audience is also waiting for them all.