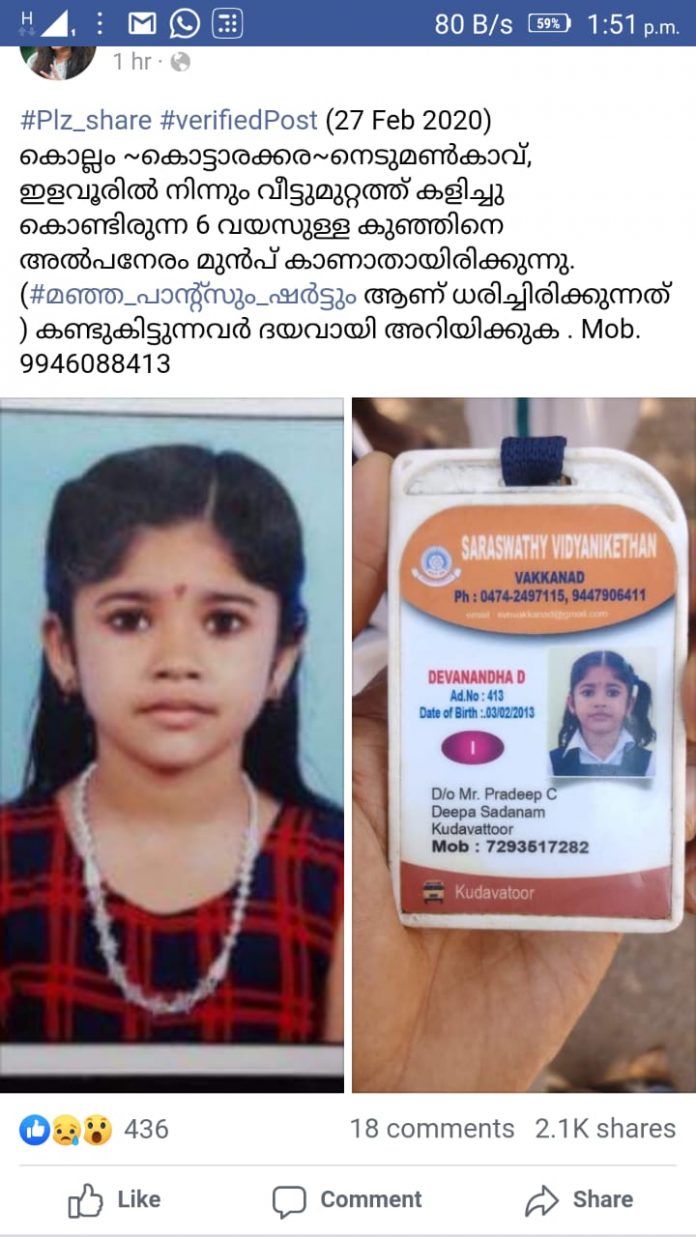 A six year old child Devanandha is missing in Kollam Kerala from her house at Elavur in Nedumankavu on Thursday 27th February 2020. Police have intensified the search to find the missing childMissing Devanandha (6), daughter of Pradeep Kumar and Deepa Sandanam is studying at Saraswathy Vidhyanikethan, Vakkand.

Update – Devanandha, the seven-year-old girl found missing from Nedumankavu Elavoor in Kottarakkara has not been found. The news that she has found from near the Siva Temple near her house is false. The news circulating that the child has been found are all false and a probe is on, her relatives said. She went missing while playing in front of her house Thursday morning. She was wearing yellow pants and a shirt. Anyone getting information about the child can contact this number 9946088413.

The mother had been sitting on the bed and the child was inside the house. The child was talking to her mother from the window. When she went back to get her clothes, hermother told police that the girl was missing. The door of the house was half open. Subsequently, they searched the neighborhood and surrounding areas but were unable to find them. Police were notified later.

The team of Fire and Rescue are currently searching in the Illavoor lake near the house. The locals said that it was formerly the center of sandalwood. Devanandha is a first class student of Saraswathi Vidyanagar School, Ilavur. Locals are investigating the area.

CCTV footage is also being examined. Police have also intensified the investigation. At the same time, the Kannanallur police station was called to the police station after receiving a message that the child was missing through social media. At the same time, the police themselves have confirmed the fact that the child could not be found. Stay tuned for updates

Anna University postpones engineering exams to May 2020 due to Coronavirus