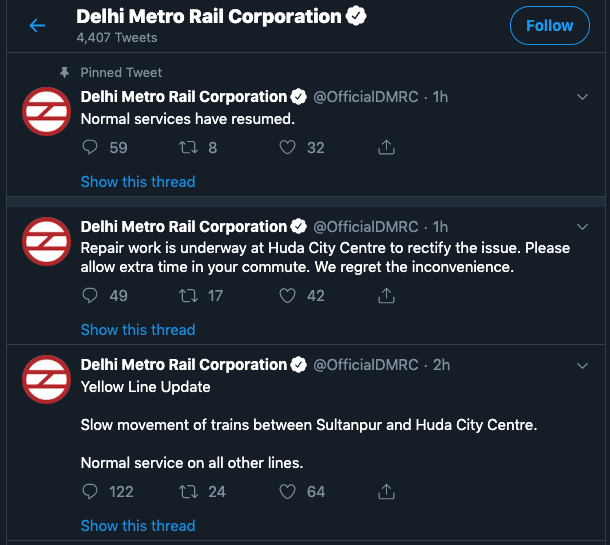 Today Delhi Metro Yellow line was affected due to some technical issues. Today being Ganesh Chathurthi there was not much office commuters crowd and hence it was manageable but people who were visiting friends and relatives on this festive eve had some difficulties. There was a delay in service from Ghitorni to Jorbagh stations, Delhi Metro Rail Corporation (DMRC) tweeted.

Slow movement of trains between Sultanpur and Huda City Centre.

Normal service on all other lines.


There was an issue on August 29, services on Yellow Line was affected briefly due to slow movement of trains between Rajiv Chowk and Qutub Minar. The Yellow Line is one of the busiest lines in the Delhi Metro network, ferrying thousands of passengers from Delhi to neighbouring Gurgaon in Haryana. The route measures almost 49 km and has a total of 37 stations. It connects Samaypur Badli in north Delhi to HUDA City Centre in Gurugram. The stretch connects prominent areas such as Delhi University, New Delhi and Old Delhi railway stations, Connaught Place, INA Market, AIIMS and Hauz Khas to name a few. (ANI)