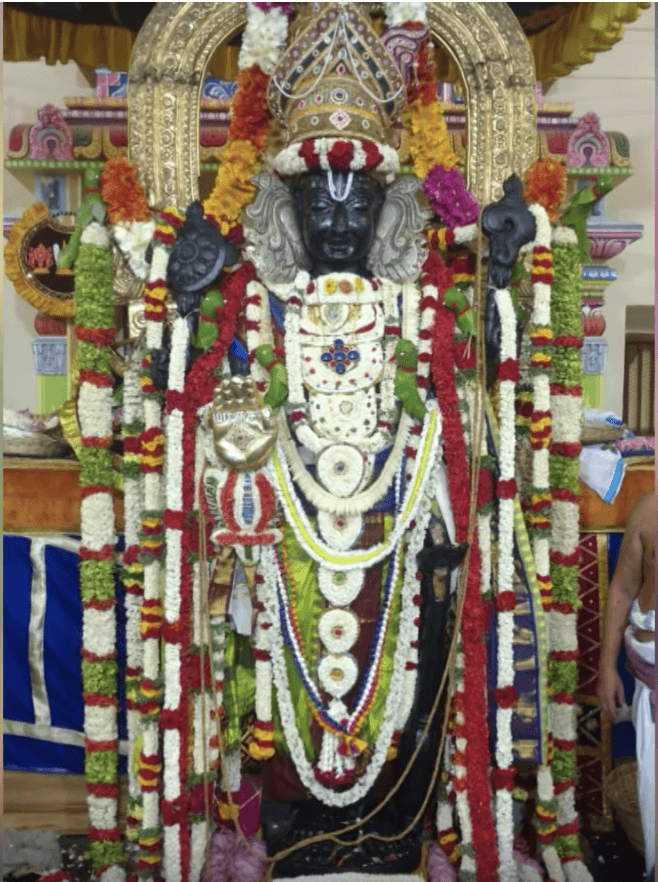 On Day 44 of Athi Varadar darshan today, the Lord looked glowed in green vastram with green and yellow garlands. It was a sight worth waiting for. The entire Vasantha Mandapam was filled with positive aura.
The kreedom looked beautiful and it was aesthetically designed to suit the lord for his height. He looked gigantic when we stood next to him


It is 44 days since the idol was taken out of the Sri Varadaraja Perumal Temple tank in Jul, 2019. The 48-day darshan began 1 July. Devotees were treated to the sayana thirukolam (reclining posture) of the Lord for the whole month.

From 1 August, the devotees and pilgrims have been worshipping him in ninra thirukolam (standing pose) and this will go on for another four days. There will be no darshan on 17th August, the last day of the vaibhavam, after which the idol will be returned to the tank.

On the 13 day of ninra thirukolam darshan today, there was heavy rush of people. Buses were being halted near Walajabad, according to reports reaching here, to streamline the traffic coming into Kanchipuram and leaving the temple town. The total crowd count is expected to be around 4 lakhs.

Yesterday being Bakrid, about 3-4 lakh people had darshan of Lord Athi Varadar. It is believed there will not be any let up in the number of people coming to Kanchipuram for darshan today as there are only three more days of Darshan left.

Since the rush continues and it would peak on the last day of darshan – 16 August – the case has been filed in the court seeking an extension in the darshan days.

The court said it would certainly hear the case if it was filed as a petition.

Lord Athi Varadar has been giving darshan in sayana thirukolam (reclining posture) from 1 July till 31 July and from then on in ninra thirukolam (standing pose). The 48-day vaibhavam would conclude 17 August with the idol being returned to the temple tank to be taken out only after 40 years.