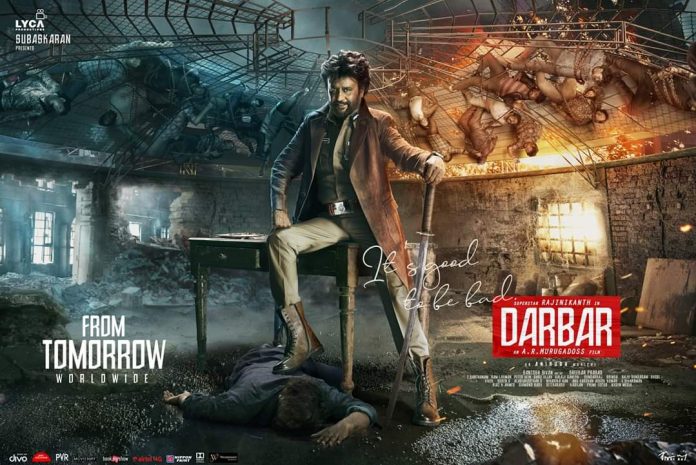 Superstar Rajinikanth’s Darbar released in a festive mood throughout Indian and early show as early as 4:30 admist fireworks where fans celebrated the First Day First Show (FDFS). Here is the exclusive review of Darbar with story and plotline. Warning it contains spoilers.

Mumbai Police Commissioner Aaditya Arunachalam (Superstar Rajinikanth) Rampage starts with Gangsters getting killed through newspaper slides as the titles roll. Thalaivar Rajini entry with a whistle podu fight scene. Rajini is in search of someone and is hunting him down. Movie shifts to Delhi, Human commission officer tells that Arunachalam is a disturbed person. Nivetha Thomas is introduced as his daughter. Time for Chumma Kizhi song. The song has turned out to be a feast for Superstar fans. Rajini rocking with high voltage steps. Rajini moves to Delhi and while handling a kidnap case confronts baddie Sunil Shetty who is drug lord. Rajini with his shrewd tactics is on a mission to clean the city from gangsters.

Nayanthara makes an entry amidst some timepass comedy by Yogi Babu. Rajini is trying to get closer to Nayanthara with much encouragement from his daughter Nivetha. Tharam Maara Single song pops up. The film is going on in a smooth way with no extraordinary highs but no boring moments either. Prateik Babbar, sone of a businessman, is a drug addict and gets arrested. But he escapes to Thailand and his proxy is put into jail. Time for Rajini to roar and bring him back. Arunachalam once again shows his mastermind and Prateik gets killed. Now comes the twist that Prateik is none other than Suneil Shetty’s son. Time for Rajini vs Suneil in the second half. INTERVAL. The first half of the film has turned out to be a pretty decent ride with Rajini’s charisma working big time. The story isn’t anything very creative, but it keeps you hooked with some mind games. Rajini’s swag, dialogues, and energetic performance will be loved by his fans. Nayanthara’s role is limited. Compared to the last few Rajini movies, Darbar has turned out to be a better film till now. Let us see if AR Murugadoss ups the momentum from here or the film goes down in the second half.

The second half starts with Suniel Shetty crossing the border and entering India. In the meanwhile a lovely marriage song ‘Dumm Dumm’ between Rajini and Nayanthara going on. Nicely picturized song. Nayanthara is looking divine. Time for another crazy fight scene with Suneil Shetty goons at the railway station with Thalaiva theme song in the background. Super entertaining. Then tragedy strikes and Arunachalam goes into disturbed mode. Due to his mental condition Arunachalam is transferred. But he asks for 4 days time to get certificate from court about his mental health. Rajini comes to know that Suneil Shetty was the man behind the tragic incident in his life. The movie heading towards climax. Murugadoss’ mark mind games going on now. The movie ends on a happy note. The End, Thalaivar rocks as Stylish Rowdy Cop

Darbar has turned out to be a pakka mass masala entertainer from Rajinikanth after a long time. The story is nothing novel but director Murugadoss took the audience on an entertaining ride with good screenplay. Rajinikanth looked very young and energetic and his performance is the biggest highlight of the movie. Not just fans but the regular audience will also love Rajini’s ultra-stylish performance as the crazy cop. Nayanthara looks divine though her role is limited. Suneil Shetty, Prateik Babbar are just about okay. Nivetha Thomas has given a good performance. The father-daughter sentiment scenes have also come out well. Anirudh’s music and BGM is an asset. Fights are good especially the railway station sequence. The production values are grand. Pongal has arrived a bit early for Superstar fans as Darbar has turned out to be a complete crowd-pleaser. At the box office it will score huge numbers in TamilNadu but in Andra Pradesh and Telengansa Sarileru Neekevvaru and Ala Vaikunthapurramuloo might dent its prospects. Overall Darbar is a good watch for this festive season.