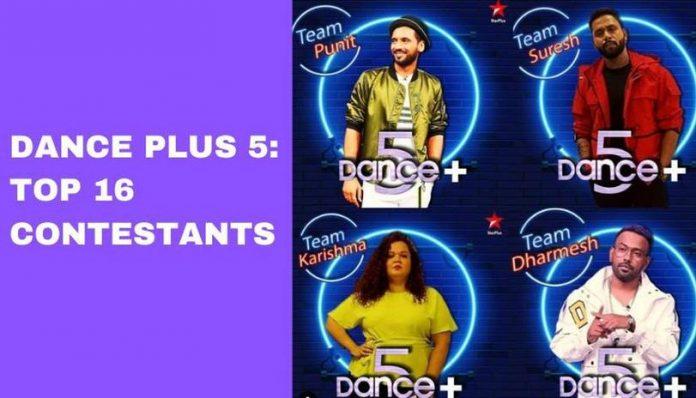 Dance Plus 5 is all about how a particular contestant shows off his dance skills. Each contestant has his own style by which they grace the Dance Floor. The audience are simply loving all performances performed by the contestants.

Dance Plus 5 is all about searching new talents from all over India. They are brought upon on the biggest stage. They are mentored by fabulous trained dancers such as Karishma Chavan, Dharmesh, Punit Pathak, Suresh Mukund. Remo D’Souza is the Super Judge who also guides and appreciates their performances. The contestants perform on diverse dance forms in all episodes.

In the latest promos, we can see Suraj and Priyanka perform a Scorpion Act. Judges and Super Judge are thoroughly impressed. Geeta Kapoor and Terence Lewis are extremely impressed by their performance.

Film stars from the movie, Pati Patni Aur Woh, Kartik Aaryan, Bhumi Pednekar and Ananya Panday grace the set of Dance Plus 5 to promote their movie. They are also seen appreciating the contestants.

Dance Plus 5 December 7 & 8 – Most Stunning Acts of the Weekend!

Recent promos show that Jahangir Alam has performed something special apart from his skill set. Geeta Kapoor And Terence Lewis came on the stage and congratulated Jahangir for his performance.

In the promos, The V Unbeatables perform on the song, ‘Arara Nakamuka’. It has been shown that 2-3 dancers jump from a ledge as a step in their performance. Next, they create a huge tower themselves and we see one crew member standing on them. Other crew member jumps from between the tower. Geeta Kapoor is seen shocked by this move. Even Special guests Kartik Aryaan and Anandya Panday are seen shocked as how did they pull it off. Super Judge Remo and Suresh Mukund are seen cheering them while they are performing.

The show start with a stunning entry made by Geeta Kapoor, Terrence Lewis and Remo D’Souza. Then they are joined by the captains. They all dance on ‘Ek Dusre se Karte hain Pyaar Hum’. Geeta Kapoor mentions that the trio has completed 10 years of Friendship.

Siba Prasad performs next on ‘Kisi Ki Muskurahton pe Ho Nisar’. His performance is well appreciated. Siba’s parents give him a surprise. He is surprised enough and reveals he hasn’t been home in last 10 years.

Suresh thanks Geeta, Remo and Terrence for bringing dance revolution in India. The Special Guests, Captains and Super Judge perform with each other. Suresh then challenges The Dynamic Dance Crew and Deepika and Rupesh from Team Dharmesh and Team Karishma respectively. The DDC dance beautifully on ‘Hum Hai Is Pal Yaahaan’. Deepika and Suresh perform on ‘Tadap Tadap’, which is an emotional performance. Terrence Lewis gives them a standing oviation, while Remo is thankful that they gave Popping a new soul. They receive full marks for their performance. Deepika gets emotional on seeing her parents watch her performance.

Karishma gives a challenge called ‘Ek aur Ek Gyarah’. From Team Suresh, Sooraj and Priyanka will have to perform with Sujan and Anchal from Season 4. Bhim Bahadur from Punit’s gang will perform with Season 4’s Gang 13. Both the performances are very well appreciated by all the captains and judges. In the end, Remo tells everyone to pull up their socks and perform well.