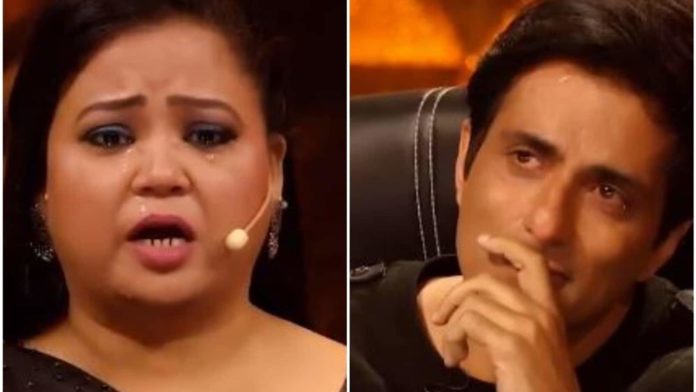 Today’s episode in Colors Tv’s Dancing Reality Shows Dance Deewane 3 was very special with man emotional moments. In the presence of Bollywood actor Sonu Sood, who helped people by becoming a messiah during this corona epidemic, many contestants gave heart-touching performances in this episode. One of those performances was information. Everyone’s eyes were moistened to see the performance of the information narrating the story of the mother who lost her little daughter in Corona. Bharti Singh, who has been dreaming for her child for the last several years, shared the pain from her heart in front of everyone after this performance.

In this corona epidemic, not knowing how many people got away from their loved ones, how much they lost their breath, in the same way, in the performance of the information, she showed a small child who became a victim of Corona and had to be overcome by her mother forever. Everyone stood up for their performance and played applause for them. After this performance, Suchana said that this is a true story that a mother had lost her 14-day-old daughter.

Suchana further said, she is a mother herself, she cannot even imagine what it would have been like to have a mother who kept her baby in her womb for 9 months and came out of this world in just 14 days. . Hearing this story of Suchana, everyone present on the stage became emotional. Nora, Sonu Sood all have tears in their eyes.

But Laughter Queen Bharti Singh, who brought the smile for Suchana, always got the most emotional. Since last year, Bharti is thinking about planning for her child in 2021. After seeing this performance, with tears in her eyes, Bharti said, “We are planning a baby, that is, but thinking about such a pandemic, we do not feel that we should even talk about each other because I do not want to cry like that.” Seeing Bharti crying like this, Harsh calmed her by hugging her.

The Big Picture Registration Question 7: Here is the answer for seventh question of Ranveer’s Show!