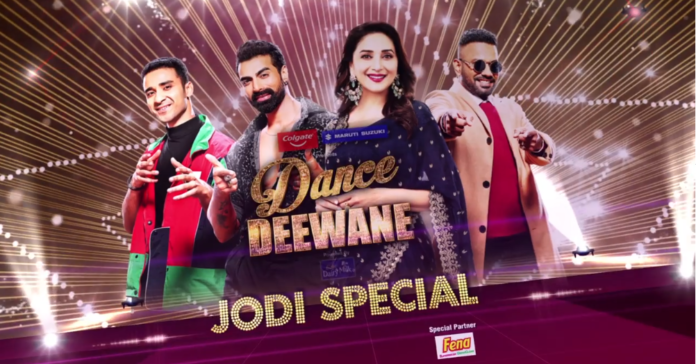 Colors TV’s sensational dance reality show featuring Madhuri Dixit, Dance Deewane 3 is back this weekend with some remarkable performances in the ‘Jodi special’ episode. This weekend’s episodes will witness noteworthy performances from the top 10 contestants of Dance Deewane 3. However, the elimination suspense looms large after a double elimination that took place three weeks ago. As a result, Papai-Antara and Somansh Dangwal were eliminated.

With few weeks left in the dance reality show, the reality show’s competition intensifies as the show nears the Grand finale. The battle for the finalist’s spot opens up from this weekend’s Madhuri’s special performances. Dharmesh’s special friend and choreographer, Paul chalked out special performance for the audience last week. Nostalgic songs from Madhuri’s films will be the highlight of this week.

Considering the double elimination three weeks ago, there is a possibility of no elimination taking place this week. However, the judges could spring a surprise or two.

Dance Deewane 3 finalists will be announced soon. However, the top 10 contestants will perform in this weekend’s episode. Piyush and Sushant scripted a seamless performance for the song ‘Lag Jaye’ in this week’s episode.

Don’t miss to watch this foot-tapping performance, on #DanceDeewane3, tonight at 9, only on #Colors#DD3 #DanceMachayenge