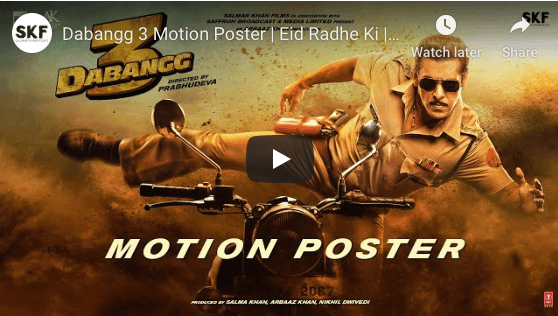 Salman Khan’s Dabangg 3 Motion Poster released today 18th October 2019 along with motion poster of his next movie Radhe which will be released for Eid 2020. Bollywood’s Bhaijaan Salman Khan’s fans have been waiting for InshaAllah (Insha-Allah) since its closure, when will they officially announce their Eid 2020 release? On October 18, Bhaijaan has ended this wait for fans and has told which film they will be released on Eid 2020. Salman Khan has already tweeted from his Twitter account that he will bring a film titled ‘Radhe: Your Most Wanted Bhai’ to be directed by Prabhudheva on the occasion of Eid 2020. Salman Khan, along with giving information about the film, has also released a motion poster of ‘Radhey: Your Most Wanted Bhai’. Bhaijaan wrote in his tweet, ‘You only asked what and when after Dabangg 3? Here is the answer … Eid will be Radhe’s. You can check the motion poster video of Dabbang 3 and Radhe here.