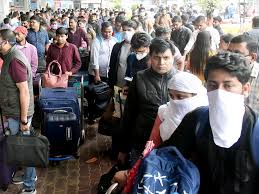 “Govt’s major focus is to break the chain the transmission, therefore, merely bracketing the outbreak in a particular stage is not of utmost importance”- Health Secretary


Section 144 restricts the assembly of four or more than four person in a place. This has been imposed in Goa and Maharashtra in order to combat the spread of corona virus. Any person contravening this order will be punishable under the Section 188 of the Indian Penal Code. The orders were issued separately across both the states. It was imposed in Goa on 21st March 2020 and in Maharashtra on 22nd March 2020. Both Governments have even warned against spreading of rumors and false messages related to the deadly corona virus. These instances of misreporting in the newspapers and across social media leads to doubts and pain in society while eventually leads to incitement and violence.

The Government of Goa imposed section 144 of the criminal Procedure code across the state to prevent large gathering in order to prevent the spread of corona virus. The state Health Minister Vishwajit Rane said section 144 was imposed on the morning of 21st March 2020.

The state government has issued an order banning inter-state transport, except for the supply of essential commodities, from Saturday night onwards. Private vehicles may be allowed to enter the state only after the passengers are thoroughly screened. Goa shares its borders with corona infested states Maharashtra and Karnataka. This imposition is a precautionary measure to prevent the spread of corona across the state of Goa. Private events, including weddings, are banned till further orders. Health authorities have imposed several restrictions at the state-run Goa Medical College and Hospital, which if required will be heading the facilities for recovery for the corona virus. The hospital has suspended visiting hours. The health department will further go on to issue a show-cause notice to a private hospital, which had earlier refused to admit a patient with symptoms of corona virus infection. The health minister Rane says that the hospital’s license will be suspended if they continue with the same behavior henceforth. The state government has also decided to decode who is behind the fake messages about the pandemic, cases would be registered against such offenders. The tourism den of India, which witnesses a heavy footfall of foreign tourists, has not reported a single positive case of coronavirus so far.

Maharashtra Chief Minister Uddhav Thackeray declared that Section 144 of the Code of Criminal Procedure will be imposed across the state following the steps of Goa which implemented the same yesterday due to ongoing coronavirus crisis. The CM has also called for an extension of Janta Curfew until tomorrow morning. He even announced that the attendance requirement in Government offices will be cut down to 5% from the earlier declared 25%. Essential services, banks and stock exchanges will continue to remain open.

The Novel coronavirus cases shot up on Sunday with fresh cases being reported across the country as per the Health Ministry. Currently there are over 340 cases across India. There are around 39 foreign nationals included in this number, including 17 from Italy, three from the Philippines, two from the UK, one each belonging to Canada, Indonesia and Singapore. The total figure also includes six deaths reported from Delhi, Karnataka, Punjab, Bihar and Maharashtra. The number of cases across the globe are rapidly increasing. The government is gearing up to facilitate social distancing. Schools, colleges, gyms, malls and other public places have been closed.