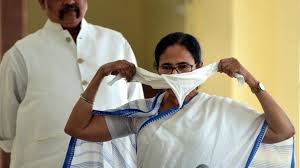 Last night Prime Minister Narendra Modi announced a national lockdown that has stunted many households and mainly movement. This move was taken taking into consideration the rapid rate at which the corona virus has been growing across the nation. Corona virus cases across the country have cross the 500 mark. People are finding it difficult to move out of their houses for basic medical facilities if required but today a woman in Salt Lake seemed to have totally lost control of herself.

A video went viral a while back wherein a woman who was stopped for normal questioning by the police was caught licking the police to make a point. Since the country is in lockdown there should be no movement from people out of their houses. Police are stationed at every nook and corner to prevent anyone from unnecessarily moving out of their houses. This woman was stopped by for normal questioning but she lost control of herself. She went ahead and licked the police personnel to prove a point that she wasn’t keeping well. The link between her being sick and licking a policeman makes no sense but she went ahead and did it. The police personnel is even telling her that she was questioned as per routine procedure and her actions were not justified.

Fraying nerves on Day 4 of the lockdown in West Bengal.

An altercation with the police in Salt Lake town saw a person lick an officer. pic.twitter.com/ykaThwqO98

As per recent reports the number of cases in West Bengal has reached eight. On Tuesday, two more people with a history of travel were tested positive. These two had returned from the UK and Egypt. They were kept in the isolation ward of Beliaghata Infectious Diseases hospital. Besides the eight cases, a 57- year old man from Coronavirus in Dumdum.